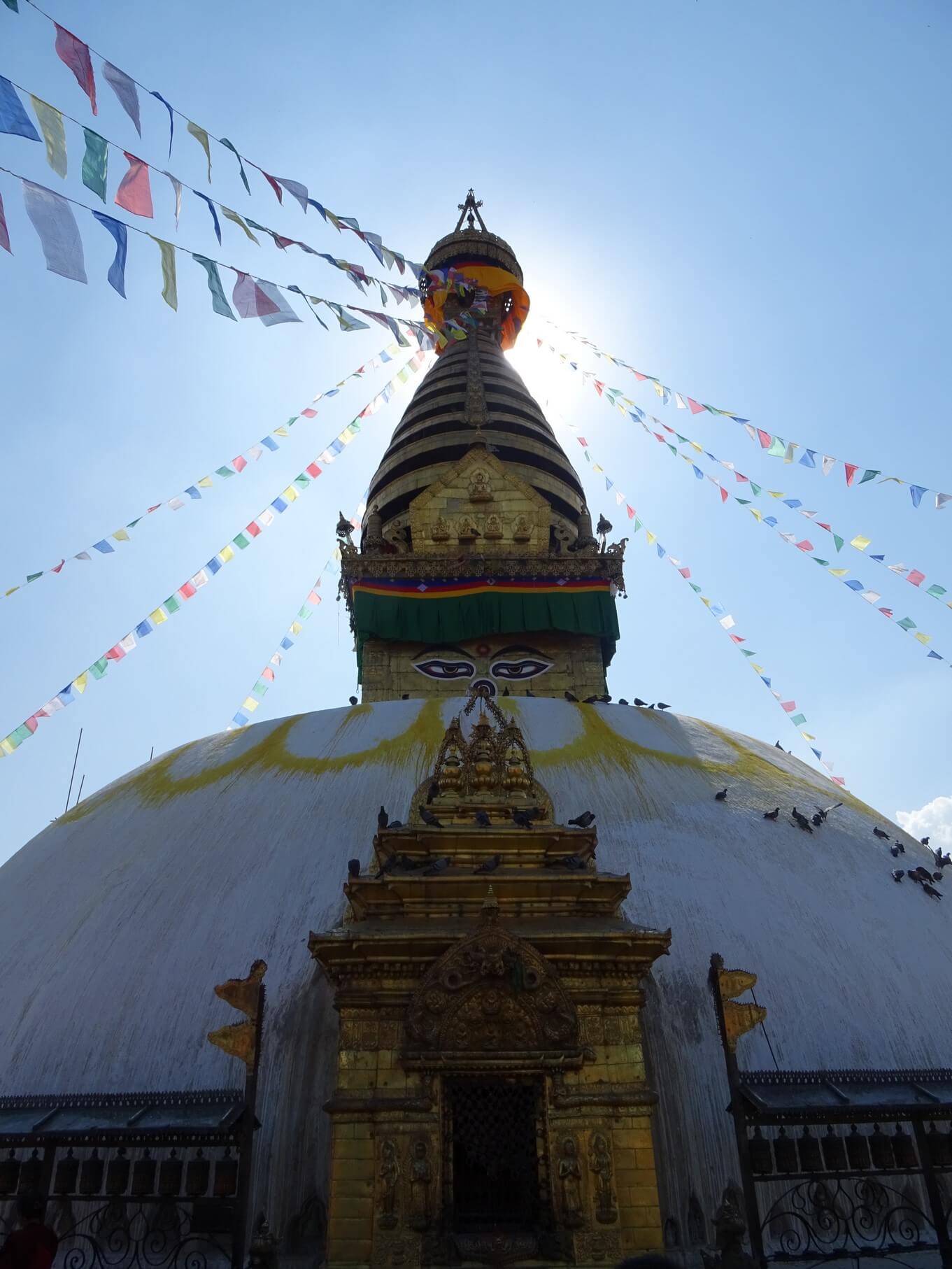 We’re writing this on the balcony of our hostel in Kathmandu after our first 24 hours here. Now that we have a moment to catch our breath, we thought we’d give you a little update of what we’ve been doing with our new-found freedom!

It’s been a surreal week for us –  firstly we both finished work last Friday, which is such a bizarre feeling, and then we left our adopted hometown and our friends behind at weekend. If it wasn’t for the fact that we have so many adventures to look forward to, it would have been a horrible moment (OK so there were a few tears shed!) Then we spent a couple of days staying with David’s Mum, getting the last few bits of preparation sorted and practising staggering under the weight of our backpacks. After months of planning and daydreaming this was it, we were finally leaving!

Here’s a picture of us all fresh-faced and excited at the airport. Luckily there are no pictures of us 24 hours (one bus, two trains, two planes and a taxi ride) later as we staggered into our dorm room, sweaty and desperate for a nap! Half excited to get out and explore the city straight away,  half dizzy and delirious with lack of sleep (turns out sleeping on planes is hard – though I can now recommend the movie Trolls on good authority!) we had to admit defeat and set our alarms for a quick power nap.

Waking up to Eminem blasting through our window from the common area we went hunting for some much earned Momos, which we decided long ago would be our first dish. A plate of 10 Momos set us back a mere 200 rupees (£1.50) and these delicious little fried delights gave us enough energy to face the hustle and bustle of Kathmandu streets.

In the evening we walked to Durbar square, much of it was either demolished or in the process of being rebuilt due to the 2015 earthquake. On the surface, Kathmandu seems fairly unscathed but close up is a different story. It’s quite shocking to be walking down a street of normal buildings and then suddenly find one that has been reduced to rubble. There’s been a huge amount of rebuilding work done, and it seems like in a time of hardship and devastation the Nepalese people have picked themselves up, brushed themselves down, and carried on. There’s still a lot to be done, but in the meantime the message is clear; Kathmandu is still open for business.

After a much-needed nights sleep we woke up bright-eyed and bushy-tailed ready for a days exploring.  We ended up walking about 3.5km up to Swayambhunath, otherwise known as Monkey Temple. We struggled up the 365 steps (yes we counted them) to get a closer look at the 1,500 year old Stupa and on the way we dodged the cute yet mischievous monkeys. The climb is tough especially if you’re not used to the steep steps, but you are rewarded with a spectacular panoramic view of Kathmandu and the Stupa itself is beautiful, with its gilded dome glinting in the sunlight. We wouldn’t recommend you follow our example and do the climb at the hottest part of the day though!

Walking up all those steps definitely helped us to work up an appetite, so we headed back into Thamel with our stomachs rumbling, in search of lunch. We ordered a veg thali each in a fairly nondescript looking place that was busy with locals and boy, we were not disappointed! We paid 200 rupees for this dish (roughly £1.50) which consisted of a huge plate of rice, dal, spiced potato & cauliflower, leafy green veg, pickles and chilli sauce, served with yoghurt and a popadom. Not only that but they came round and refilled our plates for a second portion. We were in food heaven!

Our first day as full-time adventurers has been pretty special, and tomorrow we are hopping on a bus to Pokhara to get closer to the Annapurna mountains and the fresh air.

4 thoughts on “Kathmandu? Don’t mind if we do!”