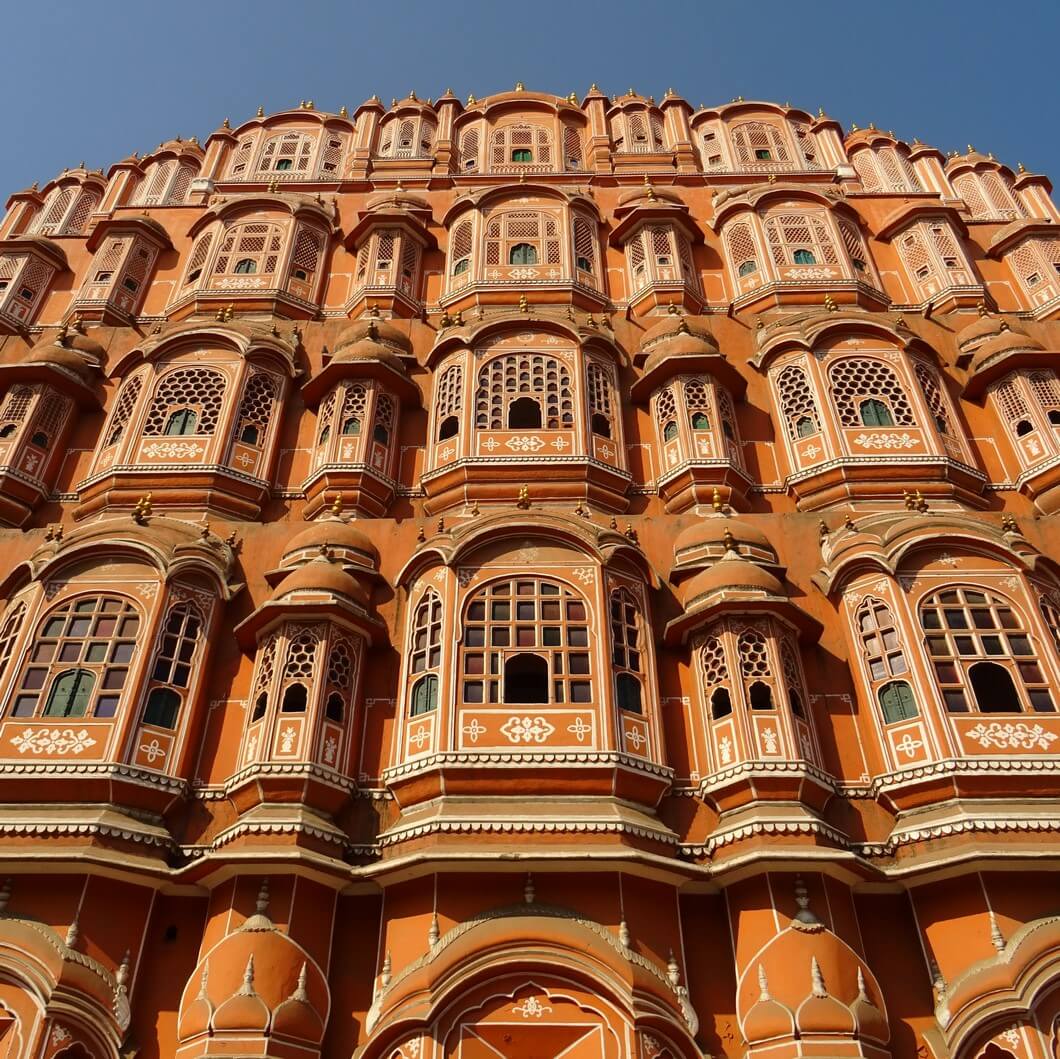 We’re writing this on yet another rooftop terrace (it’s a hard life) having just arrived in Pushkar a couple of hours ago. So far it seems like a good place to recharge our batteries after the hustle and bustle of Jaipur, and to write a little about our time there.

One of the main attractions in Jaipur is Hawa Mahal – pictured above. This beautiful terracotta-coloured, honeycomb building translates as ‘Palace of the Winds’ and although it appears to be a large building from the outside it is essentially just a screen without very much depth behind it. Built in 1799, it was designed to allow the women of the royal family to watch street festivals without being seen themselves. Don’t you just love the image of well-to-do ladies peeking out from behind tiny windows, spying on the riff-raff below? To get to the Hawa Mahal we made our way from one of the gates of the Pink City through the streets of the old bazaar. It was pretty cool and surprisingly free of other tourists, most of the shops were selling everyday items for local people, rather than catering to visitors. It was not the most pedestrian friendly place in the world however. After a few hair raising road crossings, dodging tuk-tuks, buses, cars, motorbikes, scooters, bicycles and the occasional cow, we made it there in one piece!

Another really interesting place to visit inside the Pink City is Jantar Mantar, a collection of astronomical and astrological instruments constructed by Maharajah Jai Singh II in 1734. Apparently his measurements were very accurate and he was somewhat of a pioneer in the field, in between fighting wars and other royal duties! There are all sorts of weird and wonderful structures, including the world’s largest stone sundial. Not knowing an awful lot about astronomy or astrology, the purpose of these devices was a bit of a mystery to us, but nevertheless we enjoyed wandering around the sculptures.

The other thing that we did a lot of in Jaipur (which you might have guessed from the title of this blog post!) was eat amazing food. On our first night we were pretty tired from the bus, but luckily there was a pretty good restaurant on the roof of our hotel. David was in the mood for something spicy and asked the waiter which dishes on the menu were the spiciest – we were told that we could chose anything and they would make it as hot or as mild as we liked! Feeling brave, we both asked for our meals to be made spicy (the waiter shrugged as if to say ”if you’re sure!”) When the curries arrived, they both had a sea of bright green whole chillies glistening on top, dried red chillies hiding beneath, and more chopped up and mixed in. Our mouths were on fire, lips tingling, noses running, but we ate the lot and earned a grudging nod of respect from the watching staff!

The following day, we had a tasty lunch of dum aloo, channa masala, chapatis and rice, served in a restaurant which was on top of the walls of the old city, so we could watch everyday life going on in the bazaar below. With the bill came a small silver bowl of green cumin seeds and one of large sugar granules. You are supposed to mix a spoonful of these together in your palm and then put them into your mouth and chew them together. The result is really surprising – aromatic, sweet and warming. For dinner we decided to scrub up and head to somewhere a little fancier than usual. We had heard amazing things about a place called Peacock Restaurant (and we’d also heard a rumour that Judi Dench ate there while filming The Best Exotic Marigold Hotel) so we flagged down a tuk-tuk who promptly got lost and had to ask for directions! The restaurant was on the roof of a very fancy looking hotel, and the decor was amazing – but the food was even better. After eating a huge thali and a very delicious paneer butter masala we were almost too full to move!

On Sunday, we had lunch somewhere which was the complete opposite of the polished Peacock restaurant. Mohan’s is a nondescript little place, filled with locals and half hidden by the side of the street. Yes, it’s a little grubby, and believe us you don’t want to ask to use the toilets, but the food was out of this world! Two huge thalis only set us back 110 rupees each and it was genuinely some of the best food we’ve had so far.