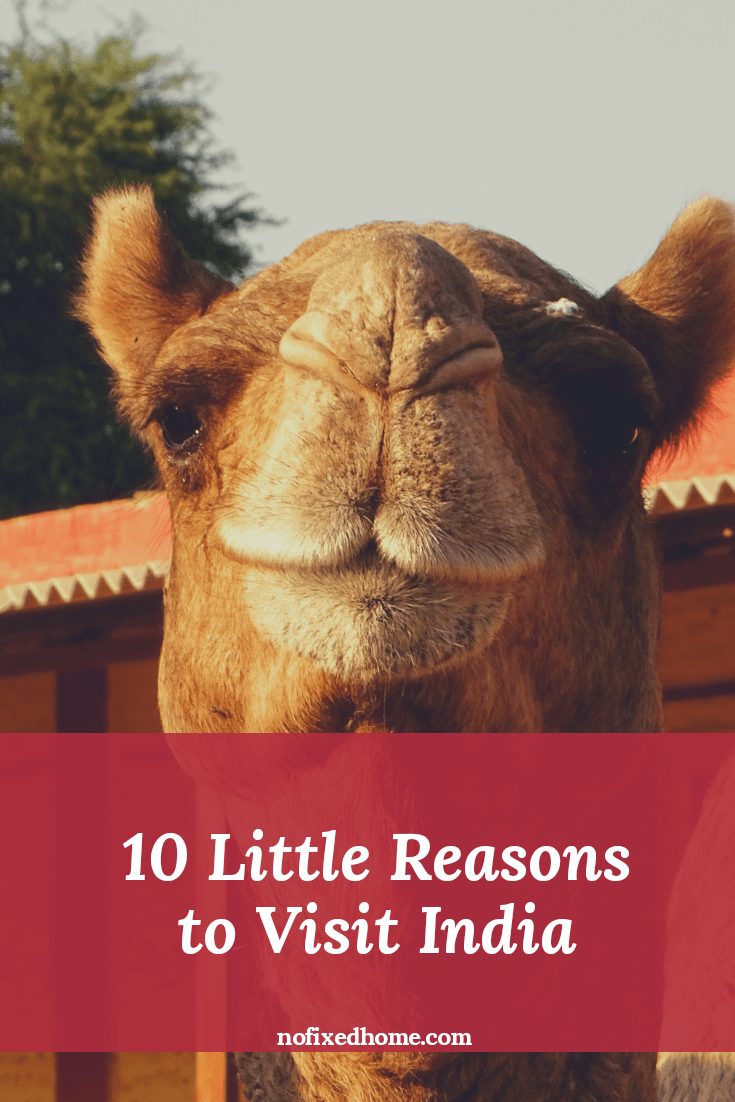 Everyone knows the big reasons to love India – the Taj Mahal, the beautiful architecture, the food, the scenery, the people…but the more you travel in India, the more little things you discover that make you fall in love. Once you look past the big sights, the hustle and bustle, the dirt and the noise, this incredible country is full of charm.

1.Tuk-tuks. Yes, technically ‘tuk-tuk’ is the Thai term, while they are called autorickshaws here (or autos for short), but everyone calls them tuk-tuks anyway. Sometimes it feels like riding in one of these three-wheeled menaces is like taking your life in your hands, but you soon learn to lean back, relax and enjoy the ride. Weaving through traffic, dodging cars and cows, feeling the wind in your hair – this is one of our favourite ways to see India. You also have to take part in the obligatory tuk-tuk price dance before your journey can begin. Your driver will name an overly inflated price to start with – to which you must gasp theatrically and shake your head, saying it is far too expensive. Your driver will respond with a slightly lower price, and you name a price which is dramatically lower. They shake their head, you start to walk off. Eventually you will agree on a “good price” for tourists – probably still higher than what a local would pay, but still good value considering how much it would be in your own currency. Your driver will always say that he knows where your destination is – even if he doesn’t. Be prepared for him to stop and ask for directions a couple of times, before turning around and heading back in the opposite direction. A tuk-tuk ride is often an adventure!

2. The Head Waggle. If you’ve spent any time in India at all, you will have come across this. It always makes us smile, but can sometimes be hard to interpret. In a country where a nod can mean a no, and a headshake can mean a yes, the head waggle can mean anything in between! It can be used to say “yes” or “OK” or “I understand” – but it can also be used when the answer should really be “no” but the person doesn’t want to say so!

3. Selfies. Honestly we’re not sure if this should be in a list of things to love or things to hate! Like people all over the world, a lot of Indian people love taking selfies. Everytime you visit an attraction there will be crowds of domestic tourists lining up to take photos of themselves in front of it. We’ve seen people take selfies on planes, trains and buses, in restaurants, by the side of the road – anywhere in fact! But the other thing that they love doing is taking selfies with tourists. You’ll quickly lose count of how many times you’re asked to pose with people while travelling around India – and you can guarantee that if you say yes to one person, there will be more waiting afterwards! But it can be kind of fun to go with it sometimes – once we said yes to a selfie at a train station and found ourselves taking photos with every single member of an extended family! They were all friendly and happy, and we had time to kill while waiting for our train so it didn’t make a difference to us. If you’re not in the mood for a selfie, you’re tired or in a hurry, a polite no thank you will usually suffice. We are usually happy to oblige if it is a group of kids or a family, but we’ll often say no if it’s a group of teenage boys or a lone bloke (particularly if they want pictures of us separately – I don’t fancy being someones ‘girlfriend’ on Facebook!) We often wonder where these pictures of us will end up and what stories are told!

4. Cows! Cows are everywhere in India. Almost as if they know they are sacred, they will calmly park themselves anywhere and refuse to budge. Everything must make way for cows – cars and buses will slam on the breaks or do heart stopping swerves at high-speed. Bikes and pedestrians weave around them as they doze on pavements, or in the middle of the street. “You can’t touch us” they seem to gloat as they chew the cud and stare you down. So revered are these beautiful animals that even their, shall we say, “offerings” are sacred. Once in Varanasi we saw a cow in front of us urinating fiercely – immediately a local woman stuck her hand into the warm stream, murmured a few words, and then sprinkled the drops onto her own head, before happily going on her way, satisfied with her morning blessing. Cows urine is also sometimes used to bless a new house – we’d prefer a bottle of wine for a housewarming gift personally!

5. Indian drinks. From the ubiquitous steaming cups of chai to the fresh juices and ice-cold fizzy drinks, India has lots to offer to the thirsty traveller. Chai is more than just a drink, it’s a routine and a comfort. At times it seems like the whole country runs on masala chai. Black tea is brewed with a mix of aromatic spices – usually cardamom, cinnamon, cloves, ginger and black peppercorn, but with many regional variations. This is simmered with milk and water, and a whole heap of sugar too! For those who prefer soft drinks, we’d recommend Limca, a sort of worse version of 7-up with around twice the amount of sugar, which is strangely enjoyable and incredibly refreshing when served cold on a hot day. See also Thums Up – a much more sugary and slightly odd version of Coke. And if you’re lucky enough to be in Goa where the tax on alcohol is very low, you can put your feet up and enjoy and ice-cold Kingfisher for around eighty rupees.

6. Train journeys. They say that travelling by train is the best way to see India, and if you can look past the delays and the sometimes filthy train stations (we’re looking at you Varanasi!) they may well be right. Depending on which class of ticket you have purchased you’ll likely be sharing a compartment between four to six people. With any luck, over the next few hours these people will become your friends as you share food and stories, while watching the countryside slip past and drinking endless cups of chai. As night falls, you make up your berth with the clean sheets provided, and doze to the sounds of the train clacking on the rails. Cheap and tasty food is available on the station platforms, if you’re brave enough to hop on and off again before the train departs, and even the toilets aren’t bad (honestly we’ve seen worse on Southern Rail trains back in the UK!) To find out more about how to travel by train in India, check out our travel tips post – Everything You Need to Know About Train Travel in India

7. Thali. Oh, the mighty thali – it might be the king of all Indian dishes. Usually one of the cheapest dishes on the menu, unless you’ve ventured into a fancy tourist-type place, these are a gift to the budget traveller. Even a basic thali will have at least one or two types of curry, some dal, rice, a roti or two, with pickles, yoghurt and sometimes a poppadom on the side. More expensive thalis will have more curries, and some places will come round and top your portions up too. These also vary quite a lot from region to region – a Rajasthani thali will be very different from a South Indian thali for instance. It’s a great and filling way of sampling a few different dishes. If you’re lucky you might even get a small Indian sweet on your plate – a syrupy sweet Gulab Jamun or a crumbly square of sugar cane.

8. Dosa. It may be cheating to include two food items in this list, but gosh darn we just love dosas! This South Indian snack is basically a giant pancake, usually made from chickpea flour, which is then rolled up and eaten plain or stuffed with a filling. Our favourite is a masala dosa which is filled with lightly spiced potato. Dosas come with a tangy sambar to dunk the pieces in, and are best eaten with the hands – ripping off a piece, scooping up some filling, dunking in the sambar and then scooping the whole lot into your mouth – yum!

9. Monkeys. Ok so we know that a lot of locals would consider them pests, but they’re just so cute! Their innocent faces are deceptive however, these little scamps will steal anything if you let them. Avoid feeding them or having any food on you that they can snatch. They’ve been known to pinch shiny gadgets too  – so watch your cameras! Remember they are wild animals and don’t get too close if you’re trying to get a photo, particularly if there are baby monkeys nearby as the parents can be aggressively protective. That all sounds pretty off-putting doesn’t it – but when you spot a troop cuddling up or a cheeky face peering out at you from the trees, you can’t help but smile!

10. Kids. Sometimes when travelling around India, you can get a little jaded – on those days when it seems like everyone is out to make money from you. But when you see local kids acting with childish innocence and joy it really makes it worthwhile. Of course, you do see children asking for money, and it can be heartbreaking. However, you also see kids playing in the street, kicking a football around or practising their bowling, copying their favourite cricket stars. Sometimes they will come up just to say hello and ask your name. Once, in Rajasthan, we went into a restaurant where some local kids were having a birthday party – every single on of them came over to say hello, giggling delightedly when we chatted to them, answered their questions and praised their English. In the same town, we were taking photos in the street when two brothers came up to us and asked us to take their picture – they didn’t want anything, and once we’d showed them their faces on the camera screen they broke into delighted laughter before running off hand-in-hand!

This is just a handful of the lovely little ways that India gets under your skin and makes you want to stay just that little bit longer. If you’ve got anything to add, let us know in the comments!