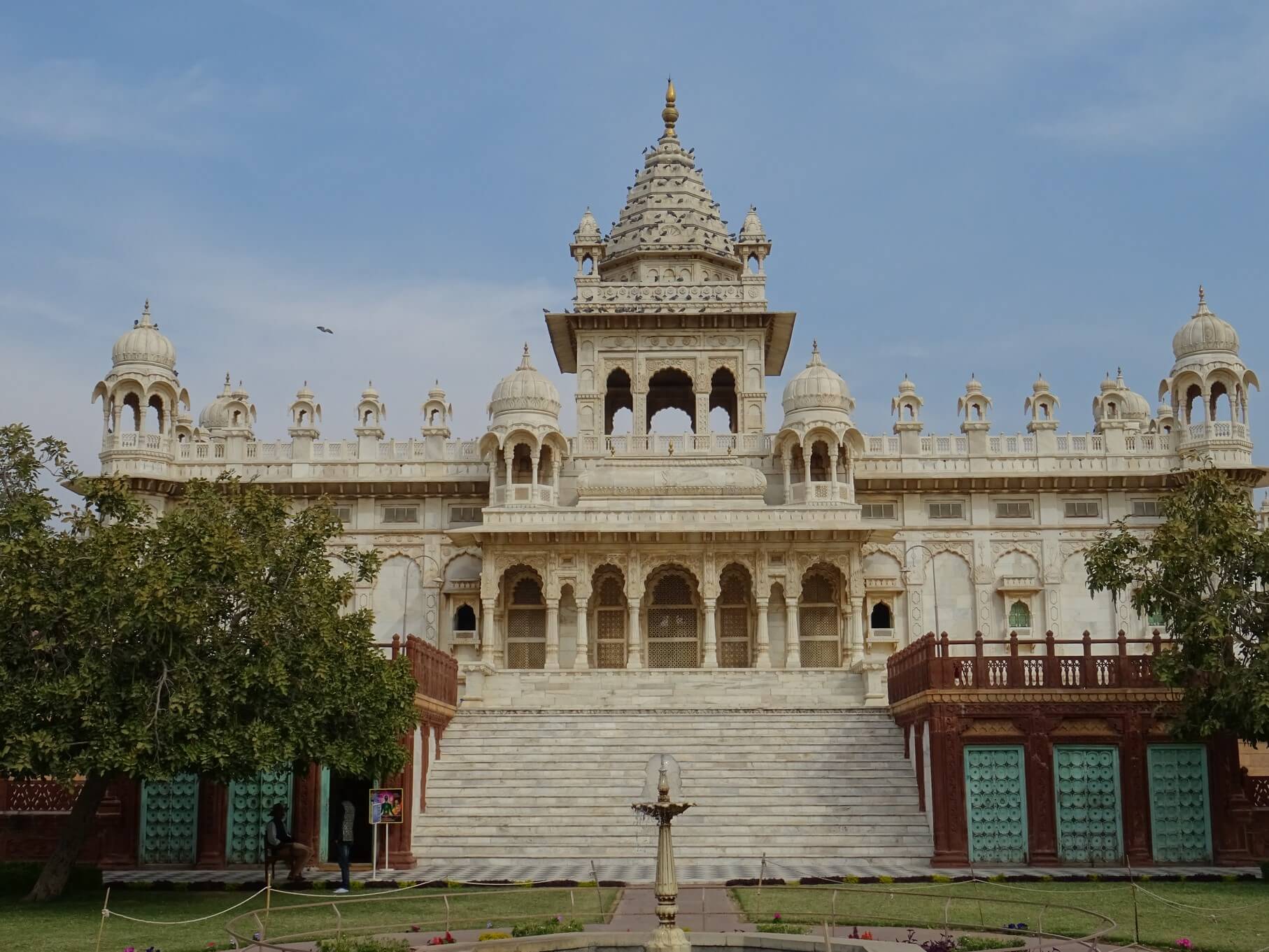 Greetings from Jodhpur, the Blue City! We’ve really enjoyed spending a few days in this charming little city, with its iconic fort towering above the sky blue houses of the old town. We were very grateful to arrive here on Friday afternoon following an incredibly bumpy journey from Pushkar, crammed into a hot and dusty local bus. After a quick chai and a snack on the rooftop of our guesthouse, we set off to explore the maze of tiny streets, centring on the colourful chaos of the Sadar market. Hawkers call from every corner, selling rainbows of bangles, silver flashes of jewellery, fragrant bright red and orange spices and vivid shawls and saris.

The following day we stretched our legs and walked up to the key attraction in Jodhpur – Mehrangarh Fort. You can’t really miss this landmark, perched high up above the old town. The fort was originally constructed around 1460 but successive rulers added their own mark over the centuries. Inside the rugged walls there is a labyrinth  of intricate and beautiful rooms. Since it was included in the admission price, we did the touristy thing and plugged ourselves into the audio guide. It was well worth the ticket cost as it took us about two hours to go around the fort and the interesting museum within. We learned lots of captivating background through the crisp tones of the audio guide – like one Queen who would not let her husband back through the grand gates into the fort after he returned from being defeated in battle, citing “Death before dishonour”. (She was later persuaded to relent by the rest of the family and the battle-weary ruler was allowed to enter and lick his wounds in peace!)

On Saturday morning we escaped the busy streets and enjoyed a peaceful morning at Jaswant Thada, a cenotaph overlooking the city. It was built in 1899 in memory of the Maharaja Jawsant Singh II. The main mausoleum building is really striking, constructed of polished sheets of marble which glow softly in the sunlight. There is a small pretty garden with carved pagodas and a lake, and it’s generally quite a lovely place to while away an hour or so – we had a chai by the lake and amused ourselves by watching the birds who were chilling in the water and flying away at the sight of a hawk overhead.

Jodhpur is a pretty good place to satisfy cravings for both street food and fancier restaurant fare. On our first night we treated ourselves to a curry on the rooftop terrace of a heritage hotel, Kesar, and our first beer since Agra. We sipped our cold drinks and surveyed the twinkling lights of the town below, and the orange glow of the fort above. The food was great, and it was one of the times when we asked for them to make our dishes spicy and they actually listened! Both our dishes had rich, intense sauces, ready to be mopped up with garlic naans dripping in butter.

Don’t worry, we’re not going too touristy on you, we had our fair share of street food too! Shahi Samosa is always buzzing with locals, and we eventually forced our way to the front of the queue, past the cooks who were busy tossing deep fried golden parcels in sizzling  giant woks. The snacks we had from here were honestly some of the best we’ve had so far. We ordered a mirchi vada, a samosa and a kofta and headed off eager to share. The kofta that we munched on first had a warm and succulent vegetable filling encased in a crispy fresh batter and the samosa had a delicious spiced vegetable centre, fragrant with cumin, inside its crumbly pastry triangle. The mirchi vada was basically mushy veg and an entire whole green chilli, incased in a crispy batter and deep-fried – the chilli was surprisingly fruity with a nice kick! We passed each one back and forth making satisfying food noises right by the side of the road. If you want to see a video of the mirchi vada being cooked fresh, check out our Instagram @nofixedhome or our Facebook page, facebook.com/nofixedhome

Another highlight was the kachori chaat that we had at Cafe Royale, next to the clock tower in the centre of the market. This tiny place only has a few chairs, but a surprisingly large coffee menu, and specialises in pav – soft bread rolls served in a variety of different ways. We sampled a cheese pav, which was satisfyingly melty and buttery, and a bhujia pav which was filled with crispy spicy dried noodles (a bit like the type you get in Bombay mix). But the best was definitely the kachori chaat. A kachori is like a spicy veggie fritter, and in this dish it was sliced up and mixed with tangy yoghurt and sweet, savoury chutney. Yum!

We are heading off to Bikaner tomorrow, our next stop. We’re getting closer to the desert and looking forward to getting up close and personal with some camels – we’re even hoping to get a taste of some camel milk ice cream!

0 thoughts on “Sitting Pretty in the Big Blue City”