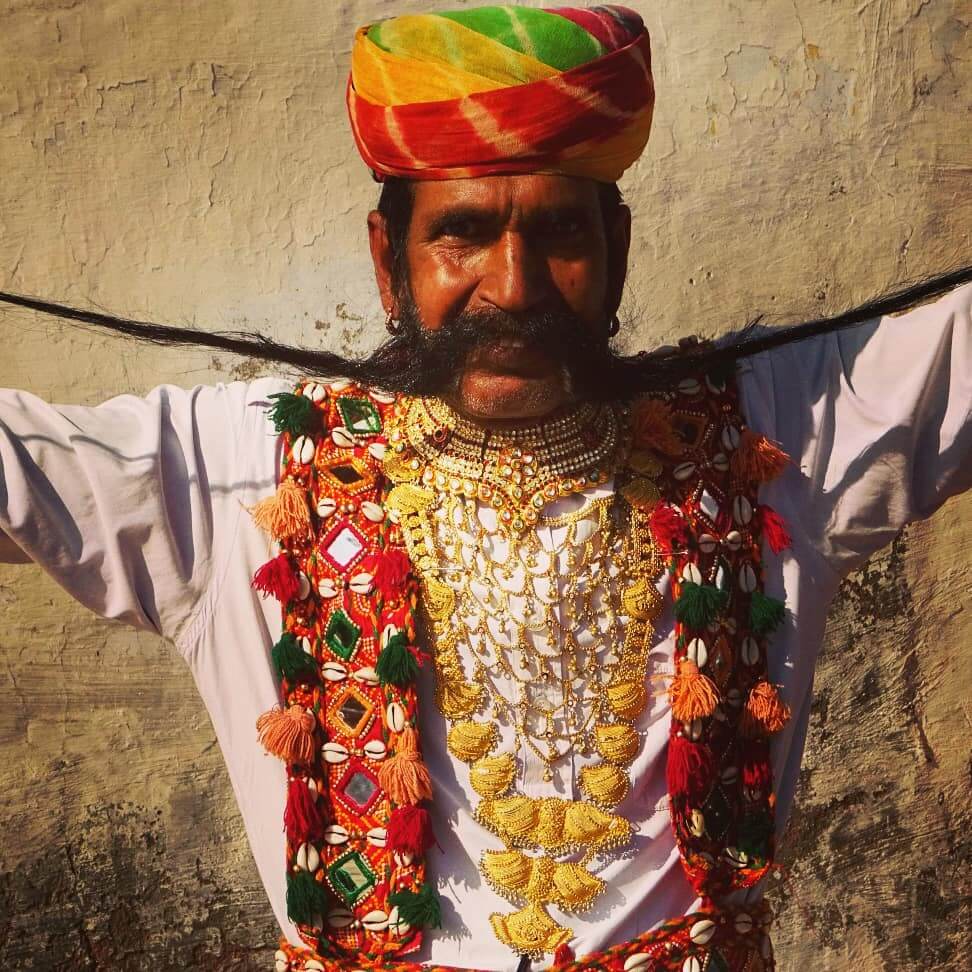 We get the impression that Bikaner is a little off the tourist trail – we’ve seen remarkably few backpackers while we’ve been here. Sure, we saw a couple of bus loads of tourists at the main attractions, being ferried around on whistle-stop Rajasthan tours from Delhi, but while we were exploring the city on foot we didn’t really see any other independent travellers. But this city has a lot to offer – it’s a little quieter than Jodhpur or Jaipur, however it still has plenty of sights.

The main place to visit is, like many other cities in the area, the fort. We met a French guy in Varanasi who had just come from Rajasthan and he claimed he’d seen so many forts that he was sick of them! Luckily we haven’t reached this point yet. Junagarh Fort is one of the few forts in Rajasthan that is not built on a hilltop, instead it is nestled right within the city. You might think that this would make it weaker than other forts, but apparently from the date it was first built in 1594 until the ruling family moved to new quarters in the early twentieth century, the fort was only ever captured for one single day! Pretty impressive. One aspect that we appreciated about this fort was that you had more of an opportunity to get up close and personal – unlike the fort in Jodhpur we were able to go into lots of rooms here and get a really good look at the beautiful interiors. The extra fifty rupees that we paid for an audio guide was well worth it as we found out lots of information about the history of the fort and the ruling family – for example General Maharaja Sir Ganga Singh who had a special spoon designed, so that he could eat without food getting onto his magnificent moustache! Moustache aside, he is widely remembered as one of the great maharajas. He ruled for 56 years, had a seat on the British Imperial War Cabinet in WWI, is credited with bringing electricity and railways to the state, and founded several women’s schools and colleges. He was also a reformist who made attempts to install partial democracy. But, yeah, he also had a kick-ass moustache.

Speaking of impressive facial hair, we went to visit Seth Bhandasar Jain Temple and met a very friendly and happy chap outside, who proudly told us he had the second longest moustache in India. Here he is posing with David:

The temple itself was fabulous. From the outside you can mainly see the bright white dome, and then you walk up the steps and get a hint of what is to come when you see the beautiful ceiling above the bell which hangs in the porch, and the decorated pillars. When you actually enter the temple, every single surface is covered with intricate carvings and paintings, in an explosion of colour. The altar is multicoloured, and sparkles with gold and mirrors. Legend has it that when the temple was built, there was a water shortage, so instead of using mortar for the foundations, they used ghee (clarified butter). We were chatting to the owner of a cafe and he told us on a hot day you can see it melting out! We were almost tempted to bring some bread with us to test this theory out, but it’s not quite hot enough at this time of the year (also, it would be gross).

From a beautiful temple to a slightly weird temple; we also went on a local bus out to Deshnok to see Karni Mata Temple, otherwise known as the Rat Temple. Around 25,000 rats call this temple home, and they are regarded as sacred. People travel from far afield to come and pay their respects to these holy rats and offer them food and milk. You must take your shoes off when entering the temple out of respect, and it is considered to be lucky if a rat chooses to run over your foot! Apart from the smell, the temple was pretty cool and the rats were kind of cute.

Today we took at tuk-tuk around eight kilometers out of the city to visit the National Research Centre on Camels. Founded in 1984, this camel farm has four hundred camels, of four different species. It’s a sort of farm/research centre/tourist attraction – they breed camels but also conduct research on camel health, nutrition and genetics. They share their findings with local farmers to help them introduce better agricultural methods. There is also a camel milk parlour on site where you can sample camel milk kulfi (ice-cream), camel milk coffee and camel milkshakes! We had a kulfi each and it was surprisingly delicious; it’s very creamy but also distinctly tangy, with a slight saltiness. They added pistachio nuts too – yum!

And finally, this little guy has been making us smile while we’ve been here, just round the corner from our guesthouse is a goat who lives in a tuk-tuk!

0 thoughts on “Camels and goats and rats, oh my!”