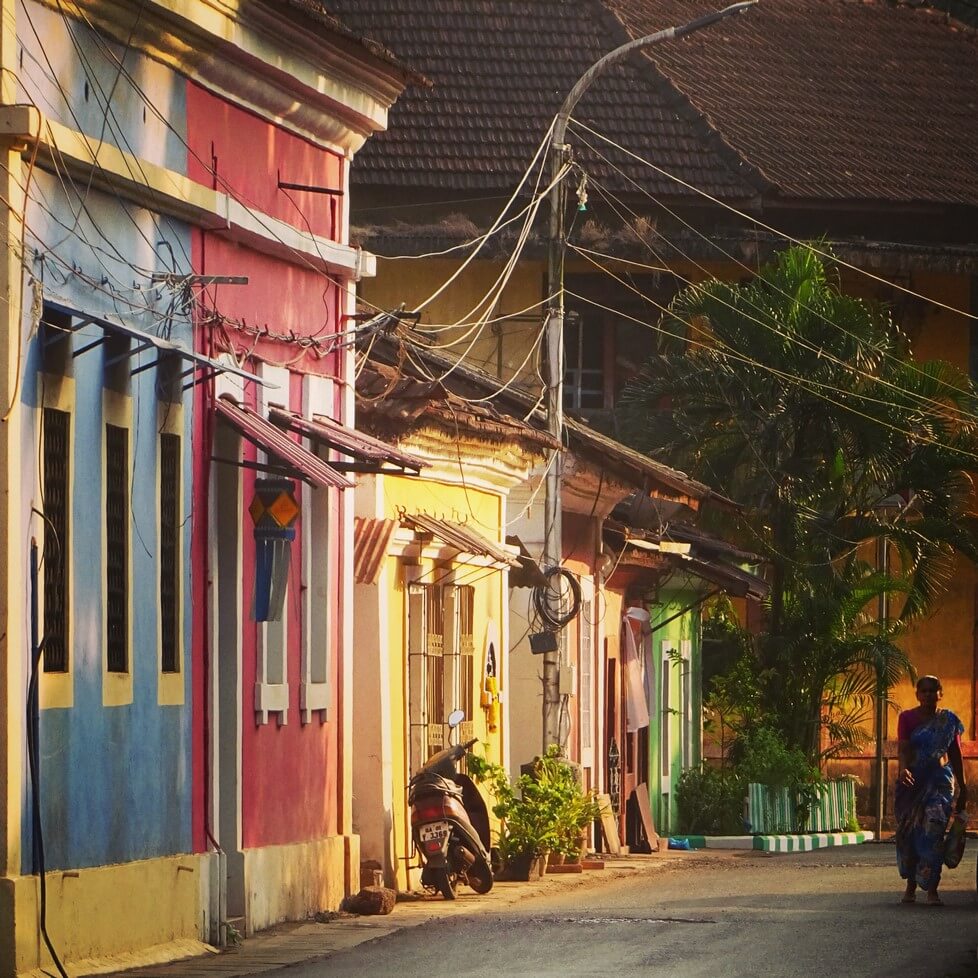 Here we are in beautiful Goa, and we have a plus one for the next two weeks, as David’s mum Mary has joined us for Christmas. For the first week, we are based in the tiny state capital of Panaji.

Our guesthouse is in the old quarter of town, Fontainhas, with its lovely winding leafy streets, colourful houses and vibrant flowers. It’s easy to spend an hour or so just wandering around here. The atmosphere in Goa is completely different to the other places we have been in India so far. Firstly because it was under Portuguese rule for an incredibly long time, from 1510 to 1961. There is a distinct colonial flavour to the architecture, and there are many churches and chapels dotted around – although the state is no longer predominantly Christian, 25% of the population still identify as such. Secondly, it is the richest state in India by quite some margin. For someone new to India, Goa is perhaps the perfect soft introduction – it still has Indian flavour and charm, but with a slightly more leisurely pace of life!

Just five minutes walk from our hostel is Maruti Temple, perched jauntily on a small hill. Once you have sweated up the flight of steps, this lovely little temple is a peaceful reward! Richly painted in red and white, the exterior is stunning and the inside is calm and quiet. The views over the old quarter and across the river are worth the climb as well. Mary pointed out that there were lots of light fixtures pointing towards the temple and we thought perhaps it would be worth returning at night to see if it was lit up. As soon as we turned the corner that evening we could see it shining in the darkness!

Unfortunately I was suffering from a little bit of Delhi belly on the second day, so David and Mary ventured on a local bus out to Old Goa – he’s taking over the keyboard for a bit to tell you all about it!

Taking a leisurely stroll Mum and I wandered the streets and roads to find Panjim bus stand, our 20 minute bus ride cost around 15 rupees each, with a window view of stubbornly sleepy looking cows – something she was going to have to get used to. We were dropped off at the cross roads of Old Goa and the Bom Jesus Basilica had its doors wide open, waiting for us to enter its ancient walls.  The site itself is surrounded by Indian holidaymakers and international tourists; families, couples, young boys and girls lining up to take selfies in front of the majestic church. Entering, your eyes are drawn to the impressive golden altar at the back, the entire structure was carved out of wood, and gilded with pure gold. Although it’s one of the best tourist spots in all of Goa, it’s still a place of worship for Catholics so respectable dress and no selfies within the Church, although people still tried the odd pose when the security wasn’t looking. An afternoon lunch at a local restaurant opposite the Basilica, Mum tried her first ever masala dosa, and sweet lassi. We boarded the rickety local bus back to Panjim, rumbling away down the road to meet up with Charlotte to tell her about our day.

The following day we decided to head to the famous Saturday Night Market in Arpora, two short bus rides away. After another dusty and hot journey, with some confusion about where to get off and a few tantalising glimpses of the sunset between the trees, we could see and hear the market as soon as we got down from the bus. Bright lights and flashing fairy lights shone across the fields, accompanied by a thumping bass soundtrack. As soon as we got through the entrance there was a maze of stalls, selling brightly coloured pashminas, beautiful mirror work cushions, intricately carved ornaments and shiny silver jewellery. Each stallholder beseeched us to “Come have a look” as we passed. “Cheap as chips!” they’d call after us. It was pretty touristy, but still worth a visit. We ate some pretty good street food and had a cold Kingfisher while sitting back and watching the scene unfurl around us, with a live band crooning in the background. We also got to introduce Mary to the joys of a tuk-tuk ride on the way home!

In the spirit of trying new things, we went to Bhojan’s for lunch the next day, as we had heard they do the best thali in town and we wanted to introduce Mary to the delights of this dish. We stepped into the delicious cool air conditioning of the restaurant and ordered three thalis, with three wonderfully cold sugary Limcas to wash it down. This was both the biggest and most theatrical thali that we’ve had so far! The table was ready set with the silver platter and individual dishes, and the waiters came round and added each part of the meal in turn, until they had built up a mountain of food in front of us. As you can see from the picture, it was a huge portion! Not only that but they come round and offer to top up your dishes frequently as well. Incredibly, this thali only cost 300 rupees per person – around £3.50. The food was fabulous – though we don’t have any photographic evidence of the faces each of us pulled when sampling the glass of buttermilk that it was served with!

One of the recommendations in our guidebook was a one hour ‘sunset river cruise’, which we thought sounded pretty nice. In our heads we had images of serenely floating down the river, looking over the side of the boat and watching the sun go down. Please, take our advice – if you’re ever in Panaji don’t fall for this! It turned out to be a cheesefest disco boat, a fact which became clear as soon as we pulled away from the jetty (after the sun had already set while we were queueing!) and realised we were trapped in our seats for the next hour. To be fair, it was actually quite entertaining – the majority of other people on the boat were domestic tourists who seemed to be having a fantastic time, racing onto the dance floor to strut their stuff. But after about an hour of watching enthusiastic dad dancing we had reached our limit, and gratefully staggered off the boat and into the nearest bar as soon as we had docked!

This evening we felt like getting out of the city so we hopped on a free ferry to nearby Chorao Island, where we spent a peaceful hour wandering around the mangrove swamp which forms the Dr. Salim Ali Bird Sanctuary. We didn’t really see a huge amount of wildlife, apart from the crabs scuttling around the mudflats, but we enjoyed the scenery and the slightly eerie quiet. But the best part was, we happened to board the ferry back to the mainland just as the sun was going down, so we got to have our sunset boat ride after all!

We’re off to the beach tomorrow – we’re spending our Christmas down in Palolem. Can’t wait to get our feet in the sea for the first time this trip!