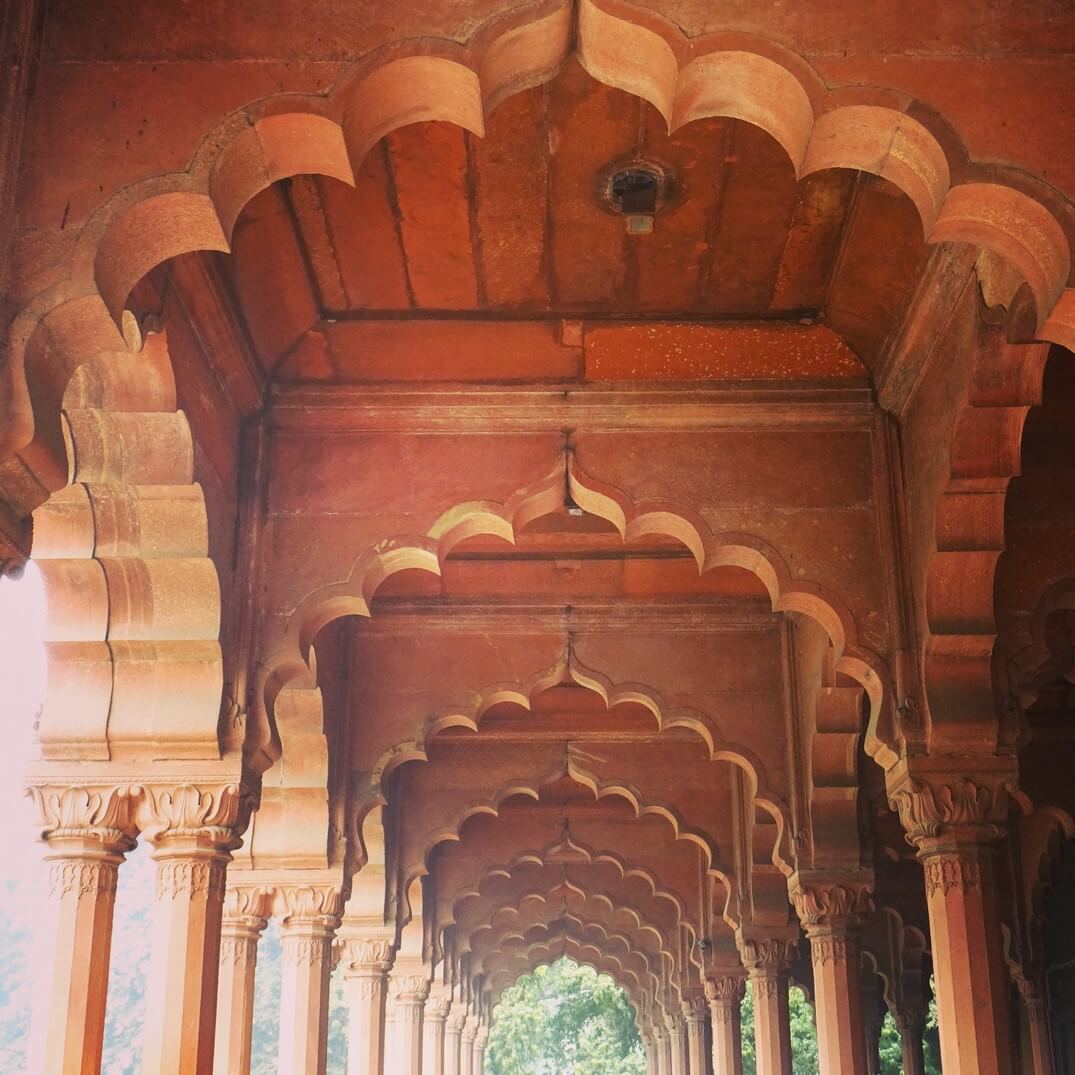 We had been putting off our visit to Delhi – originally we had planned to travel there after visiting Varanasi and Agra, before heading over to Rajasthan. However we kept running into other travellers who warned us of the current pollution problems in Delhi (one guy said it was so bad that it gave him a nosebleed, and another said it was the equivalent of smoking sixty cigarettes a day – ew!) But eventually we had to set foot in the capital, as we had a flight booked to rendezvous with David’s mum in Goa. In actual fact, we were pleasantly surprised by India’s capital city. Arriving in the dark, our tuk-tuk bravely negotiated the narrow lanes of Paharganj, weaving through scooters, motorbikes and pedestrians and dropped us at our guesthouse. This touristy market area is full of bars, restaurants and cafes serving everything a pair of train-weary travellers could want, and we happily munched on veggie burgers and chips (sometimes you need a break from Indian food!), had a cold beer each and got some much-needed sleep.

The majority of the tourist attractions in Delhi are closed on Mondays. Typically we arrived on, yep you guessed it, Sunday evening. So for our first full day in Delhi we had limited options. We decided to take advantage of the city’s relatively new metro system, and we were seriously impressed! It’s clean, efficient and cheap – most one way journeys cost us between twenty and thirty rupees each, and meant we were able to get around the city really easily. We hopped off at the impressive Connaught Place, with its shiny shops and ridiculously massive flag, and found our way through the maze of streets to the hidden Agrasen ki Baoli, a step well believed to have been built by the legendary Maharaja Agrasen.

From here we walked to India Gate, dodging traffic and insistent tuk-tuk drivers. Although it was a little tricky to find, it was worth the effort. Despite the large crowds of tourists and snack vendors, selfie sticks and tacky souvenirs, the site is quite sombre. This monument is really striking  – it’s a lot bigger than you expect and the names of the fallen soldiers respectfully etched around it gives pause for thought.

Pleased with our success at navigating here on foot, we decided to continue our impromptu walking tour and find Lodi Gardens. Turns out this was a pretty stupid plan and several steps too far! It was a warm day and by the time we reached the park nearly an hour later we were tired and desperately thirsty. After downing a sugary Limca drink each at the nearest juice stand, we had a well deserved sit down in the shade before exploring the park. This 90 acres of greenery is a welcome relief from the busy city, and even on a slightly smoggy day there were couples cuddled up on benches, families picnicking on the grass and friends playing frisbee. There are several famous tombs and monuments dotted around – we visited Bara Gumbad which is an ancient site consisting the well-preserved ruins of a mosque and possibly what was intended to be a burial site, dating from 1490.

The following day our destination was Delhi’s biggest tourist attraction – the Red Fort. Built in 1639, this was the main residence of the emperors of the Mughal dynasty. It’s certainly the biggest and most impressive looking fort that we have seen so far, at least from the outside, but to be honest we were a little disappointed by the site. They are obviously doing a lot of repair work, and large areas were under scaffolding or roped off. Compared with the amount there was to see at Jodhpur fort and Bikaner fort it was a bit of a let down. The ticket price included entry to several museums within the fort complex but these were overcrowded and dimly lit (and part of one was roped off, interestingly by using a stepladder on its side, lashed to the walls!) Still, it was worth seeing.

Our final stop, after a slightly hair-raising cycle-rickshaw ride, was the Gandhi museum and the Raj Ghat memorial which marks the place where he was cremated. The memorial site is lovely, set in gardens with quotes from the man himself dotted around on tablets, and with a eternal flame in the centre where people can come and pay their respects. The museum itself is excellent, very in-depth with lots of photographs of Gandhi’s life. It has obviously been put together with a lot of love and respect, and is well worth a visit.

Delhi is a food lovers paradise, and although we were only there for a very brief visit we tried to make the most of it. We ate at the famous Saravana Bhavan, a South India restaurant chain which has branches all over the globe, where we had delicious dosas bigger than our heads. We had very tasty Pav Bhaji and spicy paneer noodles at Haldiram’s, in amongst Delhiites who were grabbing a quick lunch break. We also managed to fit in a visit to the Old Famous Jalebi Wala to sample their amazing deep-fired syrupy goodness.

However, the best food experience of our trip to Delhi was the meal we had at Echoes. Managing to make our way here on the metro, in the rain and via a scary episode where we had to cross six lanes of Delhi traffic, we were greeted warmly by the staff and shown to a seat. The concept is really interesting – the entire restaurant is run by deaf staff. At each table is a switch hanging from the ceiling, which lights up a bulb in the centre of the restaurant with your table number on it, so you can call over a waiter, and there are also flip cards on each table so you can do things like ask for the menu and say thank you. The food was great, but it was the dessert that stole the show! We ordered and shared a sizzling chocolate brownie, which came out topped with ice cream and on a bed of lava-hot chocolate fudge sauce, still bubbling, and a Ferrero Rocher milkshake. It was probably one of the best milkshakes ever, no exaggeration. Writing about it is making us want to go back for another!

Next time you hear from us we will be sunning ourselves in beautiful Goa, and we’ll have a special guest with us!

4 thoughts on “At the Delhi Counter”