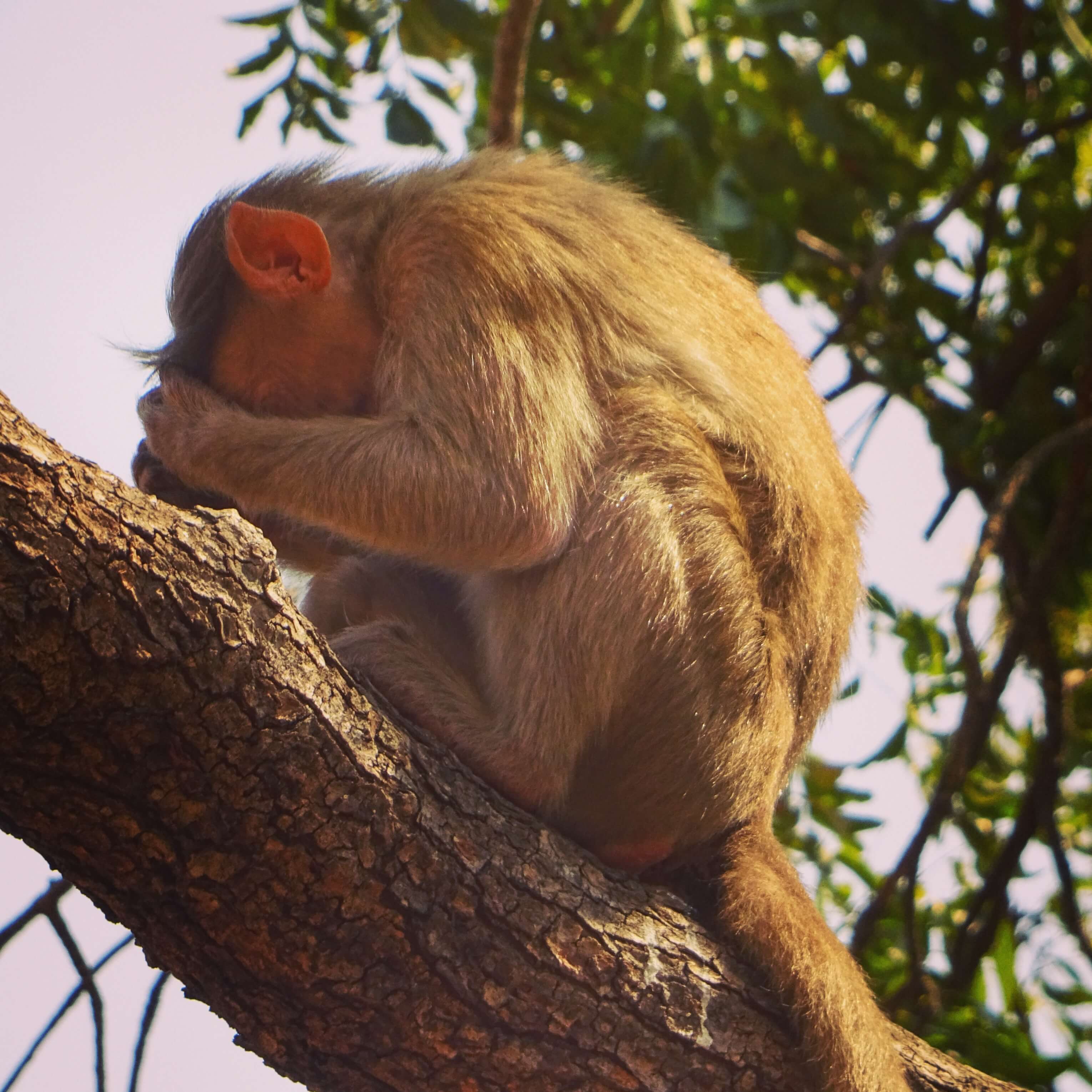 We always try to be honest with this blog, rather than presenting an idealised version of the backpacker life. So it is fair to say that our encounter with the dead turtles put a bit of a damper on our visit to Mamallapuram (Mahabalipuram). If you want to read about that, you can check out our post here.

However, Mamallapuram is a pretty good place to stay for a couple of days. There’s certainly lots to see – the UNESCO World Heritage site has no fewer than forty ancient monuments and temples. Firstly we headed over to Mamallapuram Hill, a fenced off park area which contains the majority of the monuments. The big draw here is the fabulously named Krishna’s Butterball. This giant granite boulder perches precariously on a small slope, and apparently has done so for 1200 years! Although it looks like it is about to roll down and crash at any moment, it is unmoving. A British officer tried to move the boulder in 1908, using seven elephants, and yet it still remains. The rock is six metres high, five metres wide – and it’s estimated to weigh around two-hundred and fifty tons! The Butterball has a constant stream of visitors wanting to touch it and pose next to it, so it was difficult for us to get a photo of the rock.

Also dotted around this lovely park are several other monuments including cave temples, rock carvings and ratha temples. As we have found in many of the sites we’ve visited, there was very little information available in the way of signs and labels, so we weren’t even sure what some of the monuments were called! Nonetheless we had a nice time wandering around the grassy park and clambering over rocks, admiring the sights.

That first evening, our plan was to wander down to the beach to take some photos while the town was bathed in the beautiful pre-sunset light. Mamallapuram is not really a beach destination – the sea is too rough for swimming, the beach could be lovely but is not clean, and anyone sunbathing in a bikini is likely to attract a lot of stares from the locals. We walked a little way along, paddling our feet at the water’s edge, and then we had our first encounter with a dead turtle. This one was fairly old, and although it made us sad we assumed that it was the kind of thing that happens from time to time. By the time we had seen three more, we realised it was not an isolated incident and we were feeling angry and upset. We decided not to linger on the beach, and went to take some photos of the Butterball at sunset. However, our hearts weren’t really in it, and after a few tears we decided to head home and write about it instead. For dinner that evening, we couldn’t face the rows of tourist restaurants all boasting fresh fish and seafood, not with the turtles’ fate still forefront in our minds (we’re veggies anyway, but we didn’t even want to be around fish that evening!) Luckily we found not one but two excellent local pure veg restaurants in Mamallapuram where we ate most days – for less than a hundred rupees we ate like kings on set lunch meals, or filled up on huge masala dosas for around fifty rupees.

The following day, we had the Lighthouse and Arjuna’s Penance on our itinerary. Arjuna’s Penance, also known as The Decent of the Ganges, is one of the largest bas-reliefs in the world. This huge carving, showing scenes from Hindu mythology, is cut from two twenty-seven metre long, nine metre high boulders. The detail in the work is incredible, with many gods, goddesses, animals, birds and people. Our favourite was the beautiful elephant!

The lighthouse complex included a small maritime museum and heritage museum, which only cost us twenty-five rupees each and had some interesting bits and bobs from old lighthouses, and various model boats. It cost another twenty-five rupees to go up the lighthouse and it looked like we’d get a good view from the top, so we paid up and went in through the door. Almost as soon as we started climbing up we began to regret the decision! There were a huge number of visitors, and we had to file past each other on the narrow spiral stairs, and wait for quite a while on the stairs before we could continue upwards. There was a man next to us who was clearly scared of heights and was not enjoying having to stand and stare down the middle while waiting! It didn’t get better once we finally reached the top, after a last set of the steepest steps ever with the most wobbly handrail we’d ever seen. There were so many people outside on the top of the lighthouse that we couldn’t walk around, and we couldn’t turn round and go back downstairs either as the way was blocked. We both started feeling very trapped – we took a couple of photos but then went back down as soon as we could! Back on solid ground we had a little sit down in the shade while our legs stopped wobbling. It was a good view, and if you’re OK with heights and crowds then by all means go ahead and visit – but it was not for us!

We had saved the two largest attractions for our last full day in Mamallapuram – the Shore Temple and the Five Rathas. Rathas are temples which are carved in the shape of chariots, and this group of five are dedicated to the Shiva, Vishnu and Durga traditions of Hinduism. They date from the 7th Century and are intricately carved with many details. Again, it was a popular spot for selfies!

The Shore Temple is, as the name suggests, located near the beach in Mamallapuram. This is a Shiva Temple, an eleborate pyramid with lots of detailed carvings alongside two smaller temples, and various shrines and statues. We particularly liked the row of stone cows! It was a great place to sit and watch the sun go down, along with lots of visitors.

Yes, Mamallapuram is touristy and not very clean, but the huge amount of ancient monuments here still make it a worthwhile place to visit.