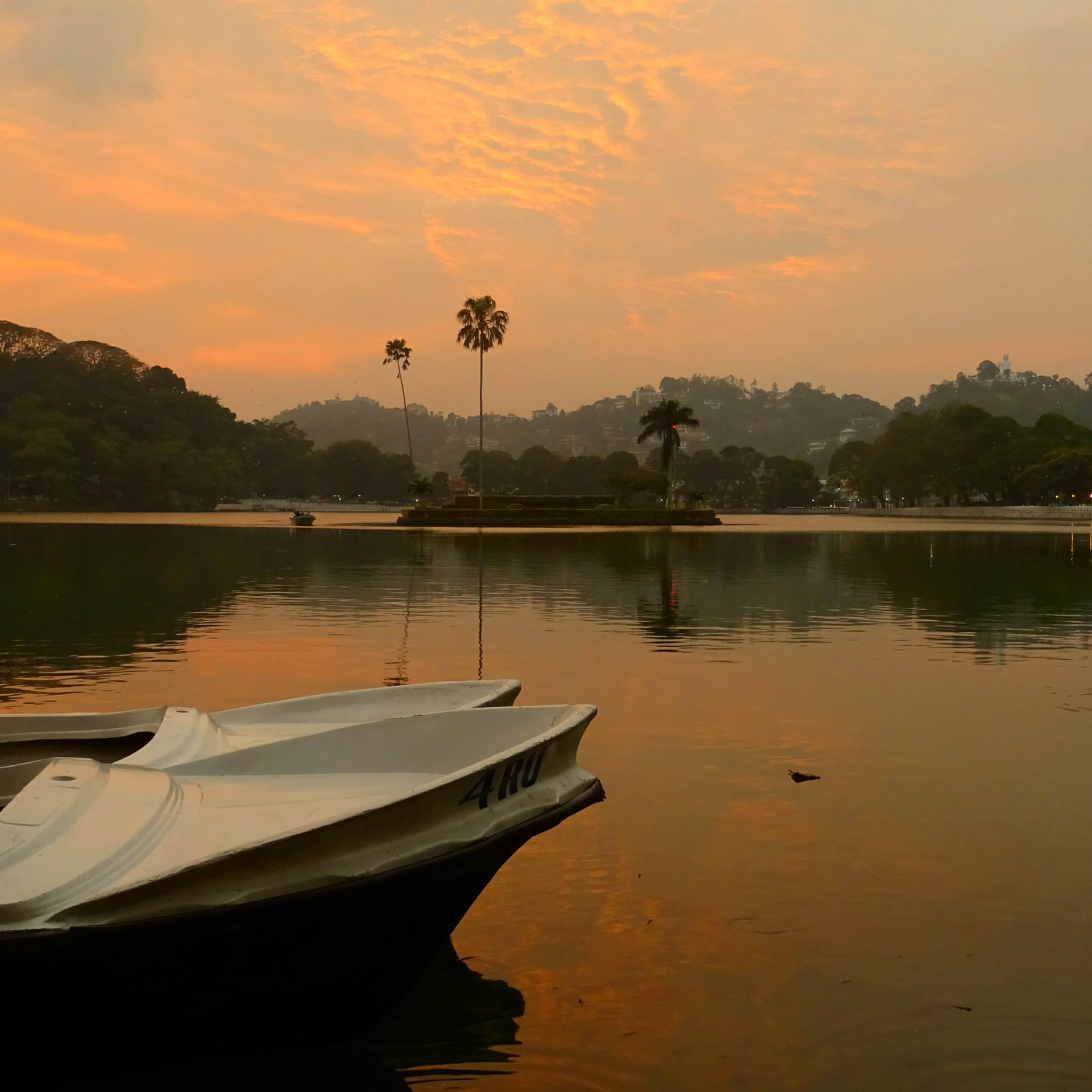 Ok, the secret is out you guys…Sri Lanka is beautiful. We have been enjoying the Hill Country for the past few days, with Kandy as our starting point and then a trip out to Sigiriya. Kandy is a small city – it’s only two or three hours from Colombo on the train but feels like a world away. Where the capital city is shiny and bustling, Kandy is tranquil and calm. The heart of this lovely little place is Kandy Lake (Bogambara Lake) which you can walk all the way around quite easily. Along one side the peace is disturbed slightly by the roar of local buses zooming past, but mostly it is a really pleasant walk. You can see fish basking in the water, murky black shapes flashing a beautiful silver when they turn and swim away. It made us laugh when people stopped to feed the fish, causing a mini-whirlpool of fins and rapids, almost as if a gang of tiny fierce sharks lurked beneath. We also saw a baby turtle and a couple of monitor lizards, as well as many ducks and other birds. A wander by the lakeside is a nature lover’s paradise! Oh, and there are also giant bats flying around at night.

The city sits in a valley between lush green hills and what seems like miles of forest in all directions. It’s not famed for it’s sunshine – mostly the place has been shrouded in a gentle mist since we have been here, with occasional drizzly rain, but somehow it all adds to the tranquil vibe. Our guesthouse was perched high on the side of one of the hills, a taxing twenty minutes of serious uphill walking from the lake, but it was worth it for the views when we finally reached the top. And don’t worry, any calories that we burned by doing this walk a couple of times a day were soon replaced by delicious Sri Lankan curries (not to mention a cold Lion beer or two). We quickly found a few favourite local food joints, where we could pick up the lunchtime staple of vegetable curry and rice, or an evening snack of dosa or kottu. We’ve been in the country a week now and sussed out that the best value meal on a menu is often the set lunch of curry and rice. This is a bit like the Indian thali – you get a pile of fluffy rice with a portion of dahl, one or two curries, a salad-type dish and a tasty crunchy poppadom. The cheapest one we’ve had was only 170 rupees, which is about 85p! It’s definitely a good choice to keep you going all afternoon.

To be honest we were fairly lazy while in Kandy, enjoying the scenery and the food but mostly taking some time to recharge. We wandered around the outside of the Temple of the Sacred Tooth Relic, admiring the buildings and watching the crowds of pilgrims come and go. This temple houses a tooth of the Buddha and is a UNESCO World Heritage Site. We also had a peek in the green and shady British Garrison Cemetery on the hill behind the temple complex, where a helpful attendant told us some of the stories behind the graves. Causes of death ranged from malaria to heatstroke, to death by elephant. We felt particularly sorry for the guy who had ‘acute diarrhoea’ inscribed on his headstone for all to see!

After a couple of days of relaxing, we jumped on a bus to Sigariya. Well, it wasn’t that straightforward of course. Actually we got on a lovely air conditioned bus as far as Dambulla, where we had to change buses in the middle of a huge downpour. We fled to a nearby local canteen and took the opportunity to fill up on curry and rice before battling our way onto a packed local bus, where we stood wedged precariously in the aisle for the next forty-five minutes. Eventually the crowded bus spat us out in Sigiriya and we shouldered our bags and trooped through the forest to our homestay. Down a muddy track and with trees all around us, our accomodation made us feel as if we were really in the middle of the jungle! We ate a wonderful home-cooked meal, while watching the rain pour down outside with a vengeance.

The following morning, we got up early and enjoyed a Sri Lankan breakfast of pancakes with coconut rice. This was welcome fuel for our mission of the day – to climb Sigiriya otherwise known as Lion Rock. We made an early start so that we could avoid some of the heat of the day, and paid the eyewatering entrance fee. We had seen pictures of the rock but we were knocked sideways when we caught our first glimpse of it in real life – nothing had prepared us for the sheer scale of this amazing monument! The rock itself dates back to Prehistoric times, but the palace ruins, gardens and frescos are the brainchild of King Kasyapa I who sounds like quite a character! The illegitimate child of King Dhatusena, he lead a coup and overthrew his father in the year 473 CE. He then moved the seat of power from Anuradhapura to Sigiriya where he built himself an elaborate palace. He ruled for eighteen years before his brother Moggallana, rightful heir to the throne, returned from exile in India and defeated him in battle. After this, the palace was abandoned. It was then used as a Buddhist monastery until the 14th Century. Patricide aside, you have to admire the determination of the guy – not content with his lot he decided he wanted to be King and to build a fabulous palace, so that’s what he did!

The steep steps take the sweating visitors up the front of the rock and through a spiral staircase to the caves where the fresco paintings are, then alongside the mirror wall, before continuing up to the Lion’s Paw and the final stairway to the summit. The ladies in the frescos are remarkably well preserved and colourful (and as one loud American visitor behind us commented, very well endowed!) and the mirror wall apparently contains graffiti from previous centuries, though it just looked like scribbles to us. The huge Lion’s Paws would have made an imposing entrance to the palace – we could imagine visitors quaking in their boots as they approached! When you finally reach the summit, you are rewarded with incredible views of the surrounding forests stretching for miles. There are still several ruined walls and partitions on the top of the rock, as well as the Kings Throne. After descending from the rock on shaky legs, we explored the beautiful gardens and interesting museum before heading back into the town for a very well deserved lunch.

We are now back in Kandy for one night, resting our legs before our next challenge – a trek to watch the sunrise from the top of Adam’s Peak. Wish us luck! C & D xx

0 thoughts on “I Want Kandy”