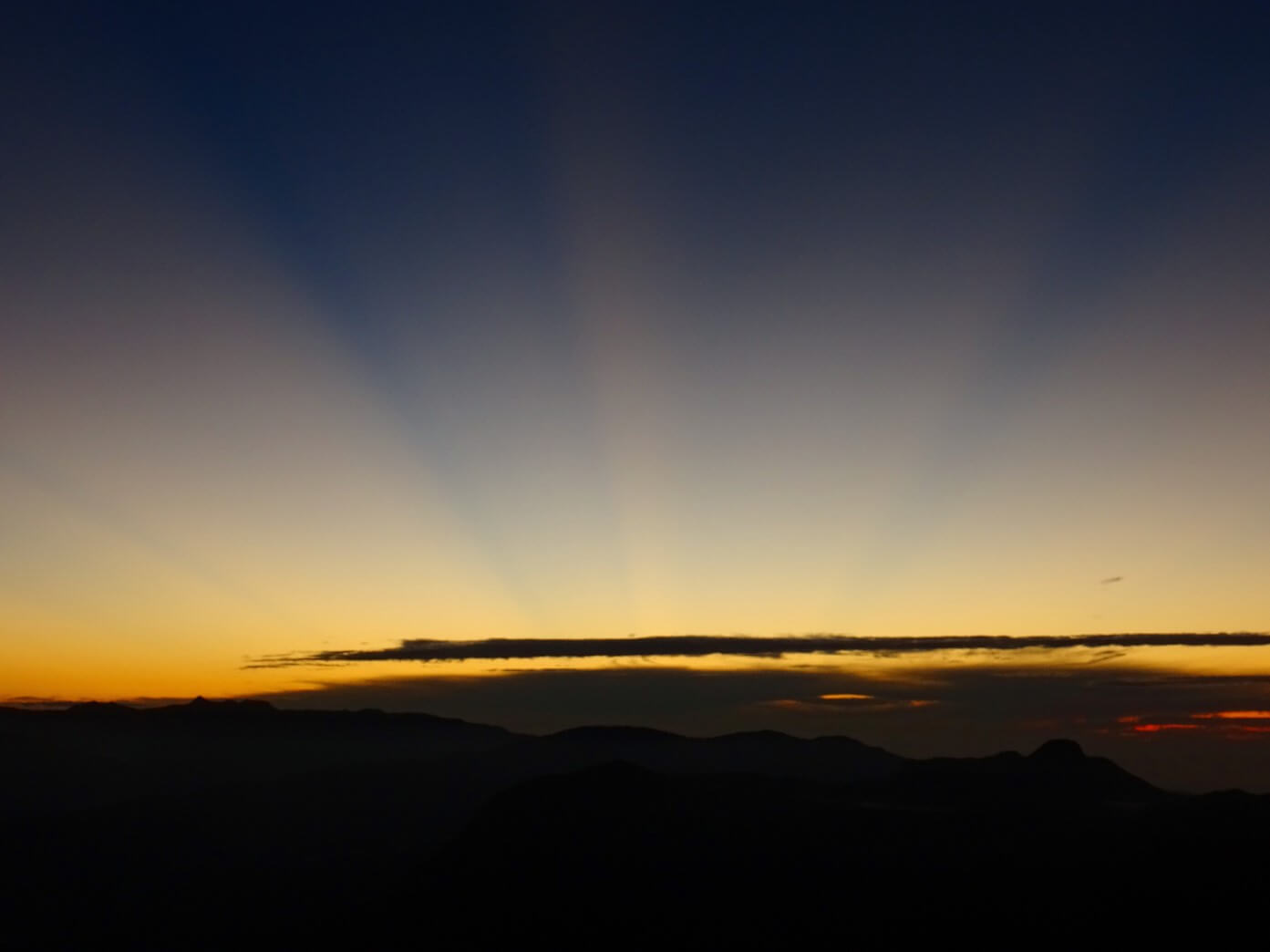 An alternative title for this post could be “two very sleep deprived people climb a mountain and end up enjoying it very much.” But we thought that was a bit long. Most people would prepare for a hike by making sure they were well rested and had lots of energy, but unfortunately for us, the hostel where we stayed for our last night in Kandy had other ideas. After a night of almost no sleep in a dorm room which was basically open to the outside, with all its traffic noise, barking dogs and mosquitos, we blearily packed up our bags and trudged to the station to start our journey to Maskeliya – aka base camp for our walk.

Things started to look up once we had fought our way onto the busy train at Kandy station, we managed to bag ourselves a seat each so we had a chance to sit back and enjoy the journey. And what a journey it was! People say that the train line from Kandy to Ella is one of the most picturesque voyages in the world, and we had a chance to experience a small section of it on this leg of our trip. The trains are cramped, slow and seem to rattle every bone in your body – but when you look out of the window none of that matters. We climbed slowly up through the hills, where bright green tea plantations lined every rugged valley and peak. Sometimes we got a glimpse of a vertigo inducing drop on one side of the tracks as the train wound its way around the ridges. We also met a friendly Scot who gave us some tips for when we reach Sri Lanka’s South coast. We are doing the other half of this train journey in a few days time as we travel onwards to Ella, and if it’s half as beautiful as what we have seen already we’ll be very happy!

We struggled off the train at Hatton, against a huge tide of people all wanting to get on, and decided it was time for a quick lunch break to give us strength for the local bus to Maskeliya. One plate of kottu later and we were ready for battle. Turns out we were lucky – we arrived at the bus station at the right time to be the first ones on the bus, which meant we had the chance to nab the limited luggage space for our rucksacks as well as getting a seat. The local buses are a great way to get around – they are unbelievably cheap (this one cost us 45 rupees which is about 20p!) but they don’t run to any sort of timetable really, they simply wait until they are full to bursting with people crammed in the aisles. So if you get on first and get a seat then great, but if not you’re in for an uncomfortable ride! The rain started to fall steadily as the bus chugged through lush green valleys, taking hairpin bends and crazy overtaking tuk-tuks in its stride. It spat us out in the quiet little town just as the rain started to come down in earnest, and by the time we had walked the short distance to our guesthouse we were pretty soggy. We were so glad to be greeted by a cup of tea and a warm cosy bedroom! Our hosts quickly arranged our transport to the start of the walk for the following morning, at a painful sounding 2am, and took our orders for dinner. After an amazing home cooked meal of rice and lots of different veggie curries, we thought we should be sensible and get an early night.

Both of our phone alarms blared loudly what seemed like only a few hours later, at 1.20am, and we lay in bed for a little while contemplating how little sleep we had got over the last couple of days, and whether this walk would be worth it! But eventually we were dressed and in the back of a taxi, creeping through the dark lanes to the start of the trail. Although we were staying around 19km away from Adam’s Peak, we could see it through the darkness as the whole path was lit up and twinkling gently up the side of the hill.

Adam’s Peak is an important pilgrimage site for Buddhists, who believe that the rock formation at the summit is the footprint of the Buddha and have erected a shine at the top. However, it is also revered in other religions too – Tamil Hindus believe it to be the footprint of Shiva, and some Christians and Muslims believe that it is where Adam first set foot on the earth after being banished from Eden. Needless to say, it is a busy spot and even at 2am the starting point was buzzing with people and traders. We joined the stream of people and excitedly started our trek. It starts quite gently but soon gives way to relentlessly steep steps – and just when you think it can’t get any steeper, believe us, it does!  After about two and a half hours of climbing solidly upwards we were exhausted, sweaty and panting! We were all stopped in small groups at the bottom of the final ascent of around fifty or so steps and given a safety briefing – keeping valuables close and that kind of thing. Then, after a few more strides, we had made it! An enormous sense of achievement washed over us as we surveyed the way we had just come, the trail of lights shining away into the distance, and took our turns to ring the bell at the top.

Watching the sunrise was genuinely one of those incredible moments that we will remember for the rest of our lives, and it made every single grueling step worthwhile. A sense of excitement hovered above the crowd as the first signs of morning light crept over the horizon, and soon the sky was lit with every shade of orange and yellow. The few wispy clouds couldn’t contain the suns rays and the mists that were clinging onto the sides of the hills soon disappeared. As we made our way back down the path we watched the sky turn blue and the sun warm the valleys to a gentle golden glow. It really was beautiful.

The descent was not a fun experience for our knees, which were creaking loudly, and our legs were starting to shake with tiredness and hunger by the time we reached the bottom. Luckily our guesthouse had breakfast waiting for us! After that we had an uneventful journey to Nuwara Eliya where we are stopping for a few days. Last night we were pretty much unconscious and dreaming of endless steps as soon as we got into bed, but soon we will explore this pretty little town (on our aching legs!) and report back.

0 thoughts on “Adam’s Peak Ain’t For The Weak”