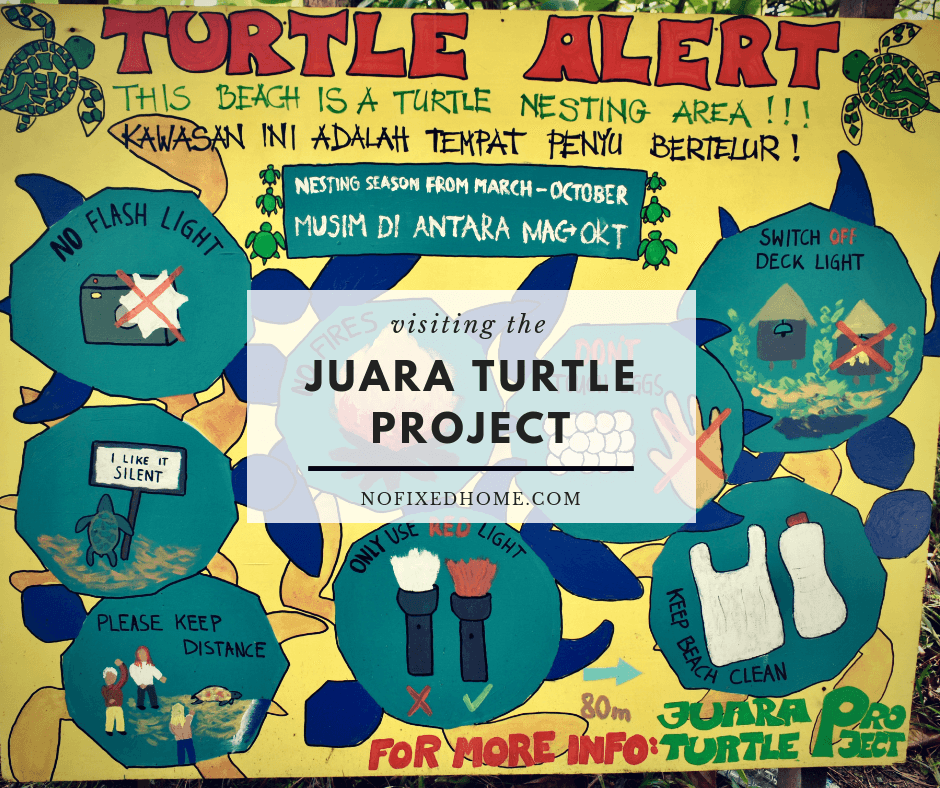 Apologies for the lack of posts this week. We’ve been in a Wi-Fi dead zone. After our visit to the humid rainforests of Borneo, and mindful of the fact that our trip is rapidly coming to an end, we fancied putting our feet up on a beautiful beach for a few days. Juara Beach on Tioman Island did not disappoint! Our little cabin faced out onto a deserted stretch of white sand, while clear blue waves lapped the shore. Without internet, all there was to do was swim, eat and read. Bliss.

One of the things that attracted us to this beach was the Juara Turtle Project. One morning, we trotted along the sand to end of the beach to find out more.

What is the Juara Turtle Project?

There used to be many turtle nesting spots on Tioman Island. Now there are four. The project started as a Government funded turtle hatchery in 2001, but unfortunately it was run more for profit from tourists than to benefit the turtles. When the contract ran out, a local business owner who was passionate about protecting the local turtles stepped in to prevent the closure. In 2008 the Juara Turtle Project as we know it today was born. Located at the south end of Juara Beach, they have a visitor centre that is open to the public, as well as a hatchery, research space and accommodation for volunteers. Juara Turtle Project look after the nesting site of Juara Beach. They also monitor two more sites further south on uninhabited beaches.

What threats do the turtles face?

There are so many! Firstly, a huge threat is fishing. Yes, turtles can get caught in the nets, but actually they often drown in the nets too. Like dolphins, turtles have lungs. They need to come up to the surface in order to breathe. If they are held in a net and cannot come up to the surface, they will run out of oxygen. Large scale fishing operations are destroying the population of turtles and other marine life (Another reason to eat a plant-based diet!)

Another threat, at least in this part of the world, is egg-collecting. In Malaysia it is not illegal to take and sell turtle eggs. The eggs and meat are both considered a delicacy. Juara Turtle Project works with locals, employing egg collectors on a fair wage as an alternative to poaching. Don’t worry – the eggs are kept safely in their hatchery!

Beach development is another huge issue. You’ve likely seen the episode of Planet Earth II which showed newly hatched turtles racing away from the sea and towards the city, disoriented by the lights. Turtles are instinctive creatures and the babies follow a strong urge to go towards the biggest light source, which would of course be the moon. Now beach resorts are springing up all along once pristine stretches of beach, it makes it more difficult for turtles to navigate their way into the sea.

One of the biggest threats to turtles however, is plastic. In the Juara Turtle Project visitor centre we watched a harrowing video. Locals had reported a turtle who seemed unable to dive back under the surface, so staff and volunteers went to take a look. Despite their efforts to help her, she died. To find out why, an autopsy was performed and it showed her stomach was full of micro plastics, fishing wire and rubbish. This poor turtle starved to death with a full stomach.

It’s such an odd juxtaposition that on one end of the beach is this amazing project, and on the other end are bars and cafes still giving out plastic straws with every drink as a matter of course.

There are three ways. Firstly they work on outreach, education and awareness. Visitors can come and see the centre and learn about turtles and the threats they face. While we were there, there was a lively school group enjoying their visit! They also work with the local population. Hopefully local businesses will see that that environmentally friendly tourism will be more beneficial in the long run.

The main way they help is by physically protecting the eggs. During nesting season, patrols walk the beach looking for the telltale track marks in the sand. When they find a nest, they collect the eggs. In an ideal world, the eggs would be left, but given the challenges they face currently, collecting them gives them a head start in the survival stakes! The eggs are placed in the hatchery, in the same depth of sand as where they were found. They are careful to keep the eggs the same way up, and bury them in the same conditions which they were originally laid. Once the eggs start to hatch, around four weeks later, they are released within a few hours.

Juara Turtle Project also collects data on the turtles. This is shared with international scientific organisations.

What are the odds?

The volunteer who showed us around asked us to guess what the likelihood of a turtle egg reaching maturity is. After all, the egg has to survive the possibility of being eaten by predators such as crabs and snakes. Once the newly hatched turtle makes it that far, it needs to wriggle out of the sand and make it to the sea without being eaten. Then it spends most of its young life dodging predators, and does not reach maturity until 25 years old! After a few guesses, we were stunned to hear the odds are around 1 in 1000. And that is before we count the threats posed by humans. Once you factor in things like plastic, fishing nets, oil spills…well, the odds fall to an incredible 1 in 10,000. This is what we are doing to our planet.

How can we help?

The two big ways we can help in our everyday lives are to avoid using single-use plastics, and to consider eating less fish and other animal products (or giving them up altogether!) But the issues facing turtles are complex and global, and involve far bigger forces than you and I. Yes, everyone needs to do their part. However, plastic pollution and global warming will take more that a few metal straws to fix. Governments and multinational corporations need to start playing their part in saving this planet. One small start in this case would be to pressure the Malaysian government to make turtle egg collection and sale illegal. Juara Turtle Project has some excellent advice here on how you can help them to make their case to the Department of Fisheries, the Department of Tourism and the Marine Parks Authority.

Our Top Tips for Juara Beach