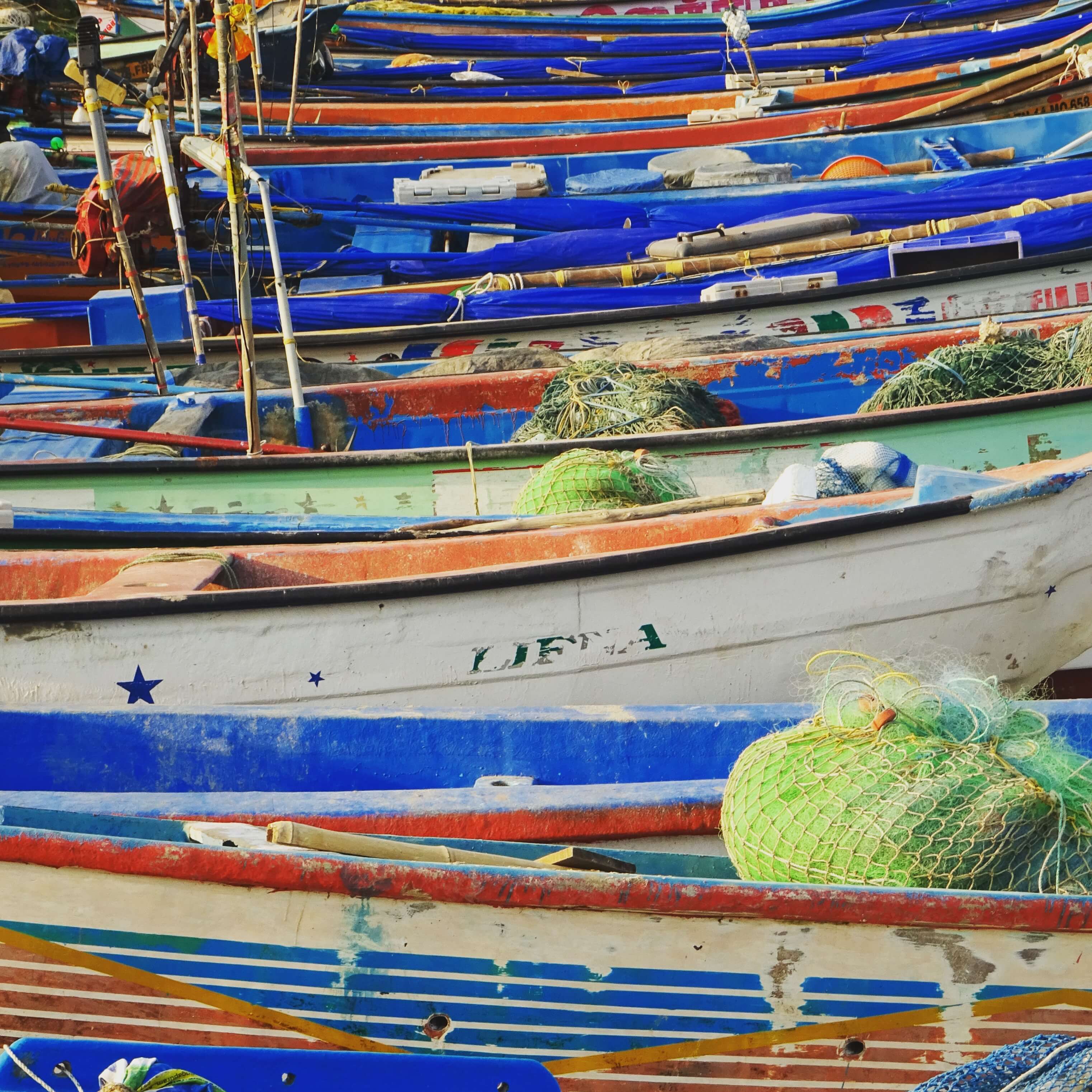 We’ve been moving around fairly quickly for the last week or so, which means this post is going to cover two places (and not just because we couldn’t think of a snappy title for a post on Thiruvananthapuram!)

We left Varkala on Sunday, and sharpened our elbows on the station platform for our brief train journey to Thiruvananthapuram (Trivandrum) – our tickets were unreserved general class which meant that we had to fight our way onto the train. Weighed down by our backpacks, we were slower that the locals who hopped on quickly and took all the available seats, so we stood for the hour journey, making conversation and watching the view through the open train doorway.

Our visit to Thiruvananthapuram was very brief, but we quite liked the city – if you look past the traffic and noise it’s not a bad place to explore. The main draw is the Padmanabhaswamy Temple, which rises up magnificently out of the old fort area. Although it is amazing to see from the outside, non-Hindus are not allowed inside. There are lots of tales of locked vaults full of treasure under the temple which makes it sound quite exciting, apparently there is one vault which has been locked for centuries and no one knows what is inside! It all sounds very Indiana Jones. We also had a look round the Kuthiramalika Palace Museum – the name means ‘Palace of Horses’ and the reason becomes clear when you see the 122 wooden carved horses that surround the roof, smiling at all who visit. There is lots of information on show about the Travancore Royal Family who built the palace in the 1840s. In the Art Gallery next door there are hundreds of photographs depicting their lives.

From here our journey continued even further South – as far South as it is possible to get in India in fact! We hopped on an unreserved passenger train to Kanyakumari and this time we had the whole train pretty much to ourselves.

Two hours later we arrived at very tip of India. Kanyakumari (Cape Comorin) is a popular pilgrimage site for both Hindus and Catholics, as well as people who flock to see the sunrise and sunset over the ocean. This is where the Indian Ocean, the Arabian Sea and the Bay of Bengal all meet. It’s busy with domestic tourists and pilgrims, but even so it’s still a small town and feels a bit like a respite after a big city.

There are two tiny islands just off the coast which you can reach by ferry. The first is the Vivekandandra Memorial, dedicated to the Hindu apostle Swami Vivekandandra. The second is the towering statue commemorating the Tamil poet Thiruvalluvar, which is seriously impressive – it is the work of over 5000 sculptors and stands at exactly 133 feet, honouring his 133 chapter epic Tirukural. Both sites look amazingly dramatic silhouetted against the setting or rising sun! On Wednesday we got up at 5am and joined the crowds of people lined up along the seafront eagerly awaiting the appearance of the sun over the horizon. Chai sellers went by on bicycles, ringing their bells, and hawkers wandered up and down selling strings of beads and plastic toys. Families passed the time by taking selfies of each other (and with us!) Finally the sun came up, and despite the sea of phone cameras it was a really special moment.

From Kanyakumari we sweated for six hours on a bumpy local bus, but we were rewarded at the end by the lovely city of Madurai.

The first leg of our Indian journey is almost over – from here we go to Pondicherry and then Mahabalipuram, before heading to Chennai to catch our flight to Sri Lanka. Tourists get a 30 day visa for Sri Lanka, and we think we might return to India at the end of this for a few more weeks, so we can experience Holi festival and perhaps tick some more places off our list before the South East Asia chapter of our trip begins!