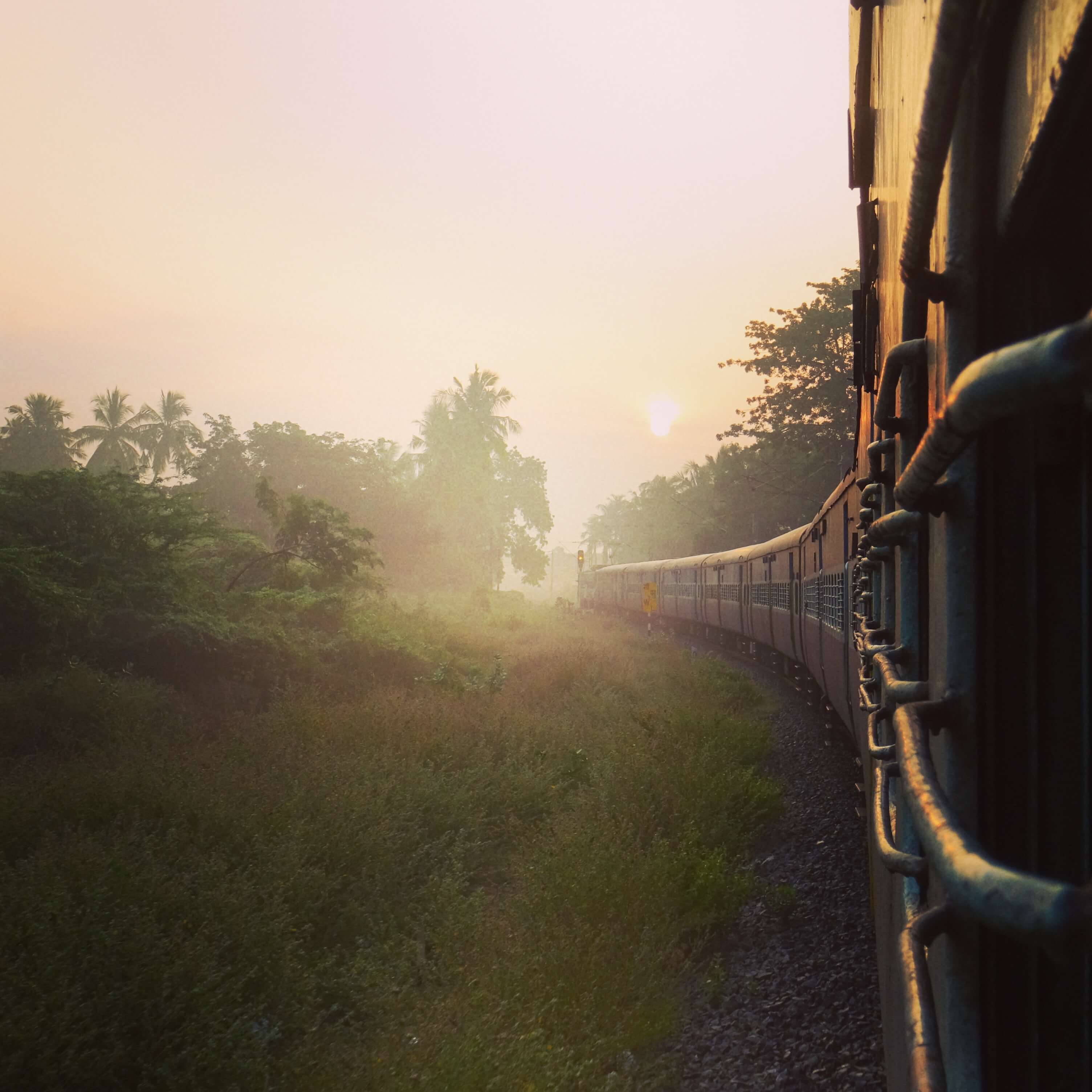 When you are in Madurai, the absolute number one thing to see is the Meenakshi Amman Temple. It’s not only one of the most important Hindu shrines in India, being a sacred abode of the Goddess Parvati, it is also really beautiful.

Four intricate gateway towers, or gopurams, guard the temple. This is the first large temple that we have been to so far on this trip which allows non-Hindus a glimpse of the inside – after abandoning our shoes and being thoroughly frisked we were able to enter through one of the gateway towers and walk around some of the beautiful pillared halls within the complex, and even to view some of the shrines. Unfortunately cameras are not allowed and we only have a few phone pictures to show, so you will have to take our word for it that the inside was incredible – every surface (floors, ceilings, pillars) was brightly painted with geometric patterns, animals, gods and goddesses. There was a festive atmosphere with market stalls, food stalls and hawkers, people coming to ask for blessings or to give thanks. There were whole family groups visiting together, stopping for selfies or a quick snack, laughing and chatting. There was also an inner sanctum reserved only for Hindus, with a giant queue of devotees waiting patiently in line. We felt really privileged to have been able to see a small glimpse of this amazing temple.

The other main sight in Madurai is Thirumalai Nayak Palace. For a bargain price of fifty rupees you can explore what is left of this 17th-century palace, erected in 1636 AD by King Thirumalai Nayak. It was previously four times larger, but now all that remains is the impressive courtyard with its intricately decorated domed ceilings and carved pillars, as well as a couple of smaller rooms which now house a museum. We really enjoyed a leisurely half an hour wandering around, taking photos and avoiding the missiles from the crowds of pigeons above our heads.

A poster that was on display in our hostel was insistent that we couldn’t visit Madurai without trying the ‘famous’ Jigarthanda drink – well who were we to argue with that? We seized our chance when we passed a shop which sold it, although we realised while in the queue that we had no idea what was in the drink or what is was made of! Undeterred, we took a leap of faith and ordered one each. Damn, it was delicious! Turns out it is an ice-cold refreshing drink made from milk, almond gum, sarsaparilla root syrup, sugar and ice-cream. When we looked it up back at the hostel, we discovered that the name Jigarthanda translates to ‘cool heart’, which is lovely (though ‘searing brain freeze’ may be more accurate). Also on our food journey we had lunch at a local institution, Murugan Idli Shop. Though this place now has several branches, including two in Singapore, Madurai was where it began. We were welcomed warmly into the basic but clean restaurant, where we enthusiastically tucked into freshly cooked crispy stuffed dosas with sambar and dips. It was certainly much-needed after a morning of getting lost in the dusty, hot, traffic-filled streets, cursing a misprinted Lonely Planet map!

We have been experimenting with different train classes since we arrived in India – we started with our first overnight journey in two AC, which is one of the more comfortable ways of travelling. Then the next time we took a sleeper train we plumped for three AC which is one class down but still reasonably nice. Last night we dipped our toes into the incredibly cheap world of sleeper class! We boarded our train at 11pm, and found our berths easily. We had the upper and middle berths, and quickly settled down for the night, amidst the snoring, farting and rustling of our fellow train travellers. Unlike the AC classes, here you don’t get a pillow or sheets, and the carriages are a little dirtier and shabbier, but it’s still comfortable enough to get a few hours sleep. We set our phone alarms for an unwelcome 4.30am, not wanting to miss our stop as we were due to arrive just before 5am at Villupuram. We had to change trains here – we waited for an hour (enjoying a very nutritious breakfast of biscuits and diabetes-inducing sweet chai)  before spending the final half hour of our journey on a passenger train to Puducherry (Pondicherry).

You can imagine, after only a couple of hours sleep and feeling rumpled and tired from the journey, how much we were looking forward to checking into our guesthouse. Alas, it was not to be a simple process! We were met with confusion when we walked in the door, and they quickly directed us somewhere else – turns out that there were two places with the same name. Not such a problem you might think, if you can just hop into a tuk-tuk and head over to the other hotel with the same name.  However, when we arrived there (and we knew this time it was the right one, having recognised it from the photos on the booking website) they claimed that they did not take online bookings, even though we showed them the email confirmation. They directed us back to the first place, saying it was their ‘other branch’ and we must be booked in there. Feeling pretty hot and grumpy by now, we again shouldered our heavy backpacks and trudged back to the previous place. They were not happy to see us come back through the door, and the man behind the desk started shouting that the guesthouse was not available for foreigners and that we had to get out. We were feeling pretty darn unwelcome now, and it was still only 9.30am!  To be fair, we’ve been in India around two months now and this is the first time we have experienced any hostility, but it wasn’t a good feeling. Needing to regroup, we headed to the French Quarter to find a cafe with wi-fi and some much-needed coffee and proper breakfasts. Half an hour later, we were happily drinking filter coffee, munching toasted brioche, and booking a new place to stay online. We’ve ended up somewhere a little out of our usual budget, but it’s really lovely and right in the centre of town, so our epic journey eventually had a happy ending (and a soft bed to have an afternoon nap!)

We’ve got lots of time to enjoy the lovely town of Puducherry now, and we’ll report back in a few days!

0 thoughts on “All Eyes on Madurai”