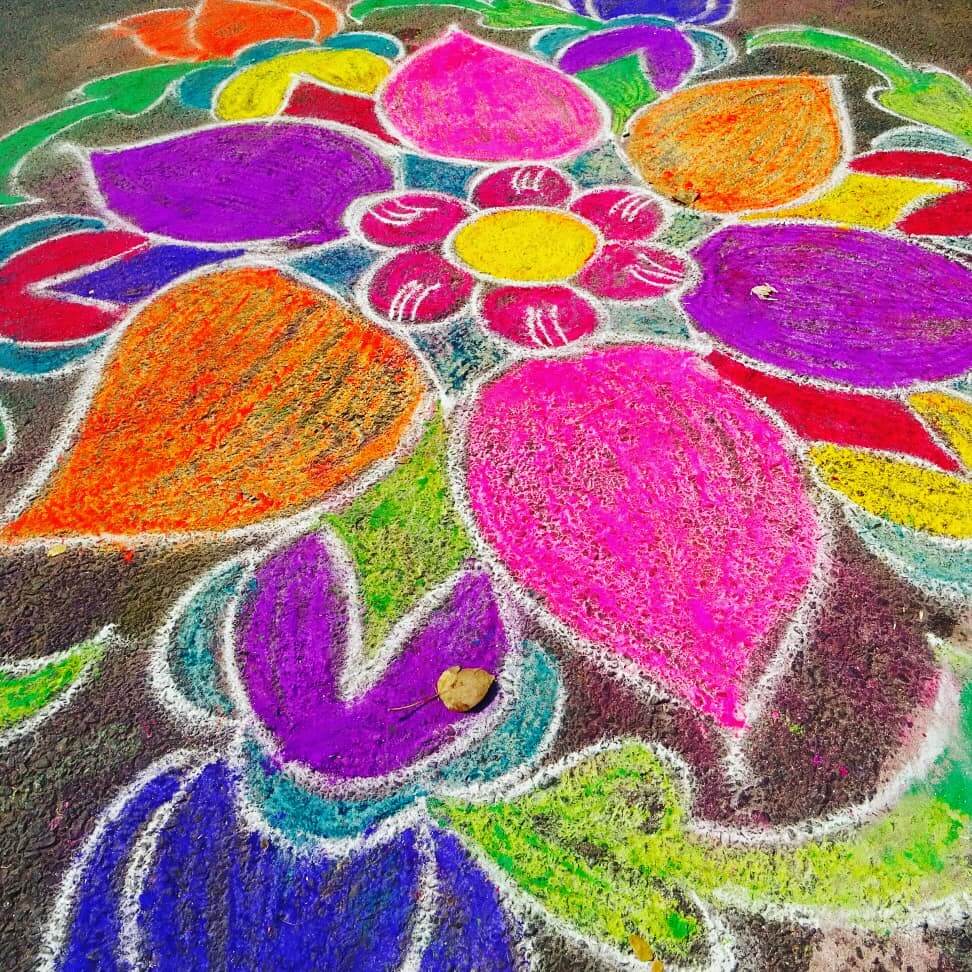 Despite the palaver that we had when we first arrived, we couldn’t help but like Puducherry (Pondicherry). The town was a French colonial settlement until as late as 1954, and the French influence is obvious, particularly in the old French Quarter. Yellow and white buildings cluster around cobbled pavements, beautiful Bougainvillea flowers tumble over the tops of crumbling walls and locals rattle past on rusty bikes. There are French bakeries, pastel-coloured Cathedrals, and blue street signs with French road names that would be right at home in Paris. And if all this gets a little too European for you, just cross over the main street and the covered canal, and you’re right back in Indian flavoured chaos, complete with never-ending car horns and wandering cows! One of the lovely things about the town is that the road along the seafront is closed to traffic in the evenings, and it seems like the whole town turns out for a stroll!

We happened to be in Puducherry for Pongal, which is a harvest festival celebrated by Tamil people all over the world. They give thanks to the sun-god for their crops, and create beautiful pictures on the pavements outside their houses, made of flower petals, or coloured rice flour or chalk. These are called Kolams, and we saw lots of them as we wandered around the streets, some were incredibly intricate. 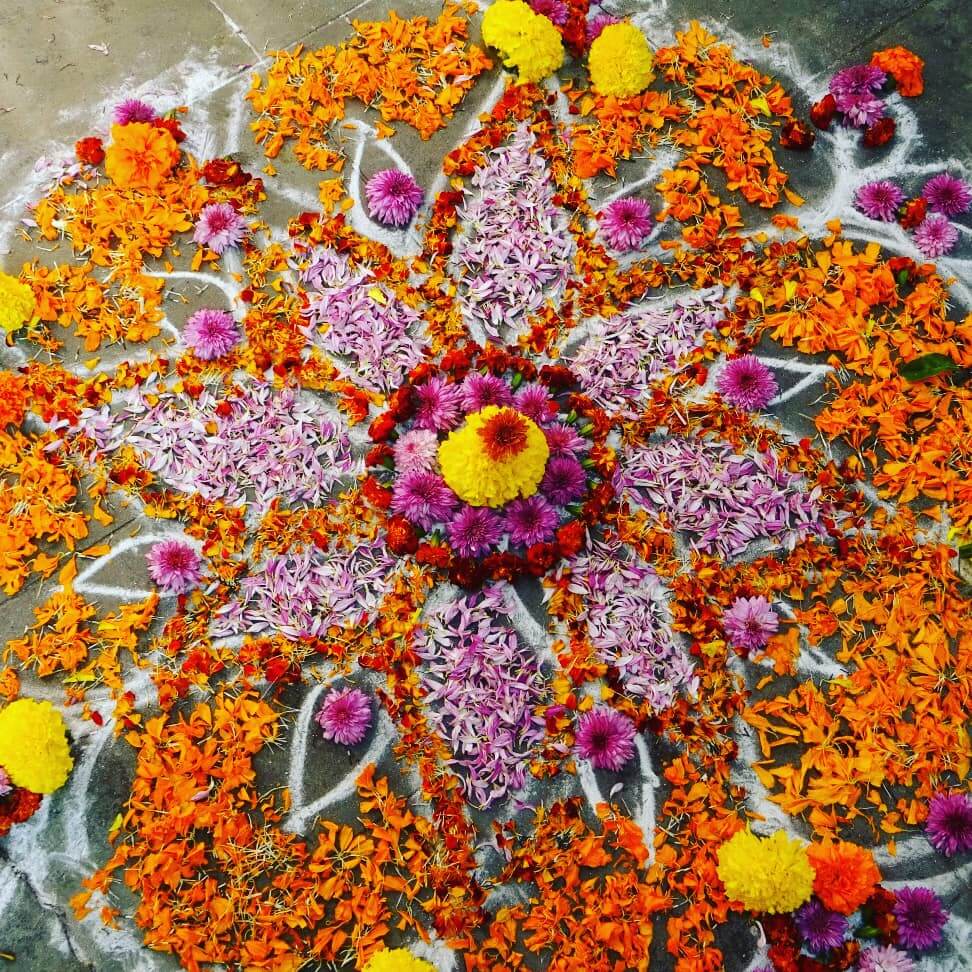 Puducherry has not one, not two, but three Cathedrals to choose from, so on our first day we decided to take a wander and check them out. First there is the pastel pink Notre Dame des Anges, standing over the French Quarter and catching the evening light. Then there is the wedding-cake white with pretty yellow details of the Our Lady of Immaculate Conception Cathedral. Lastly (but not least!) there is the towering rust-coloured Sacred Heart Basilica with its vibrant stained glass windows. 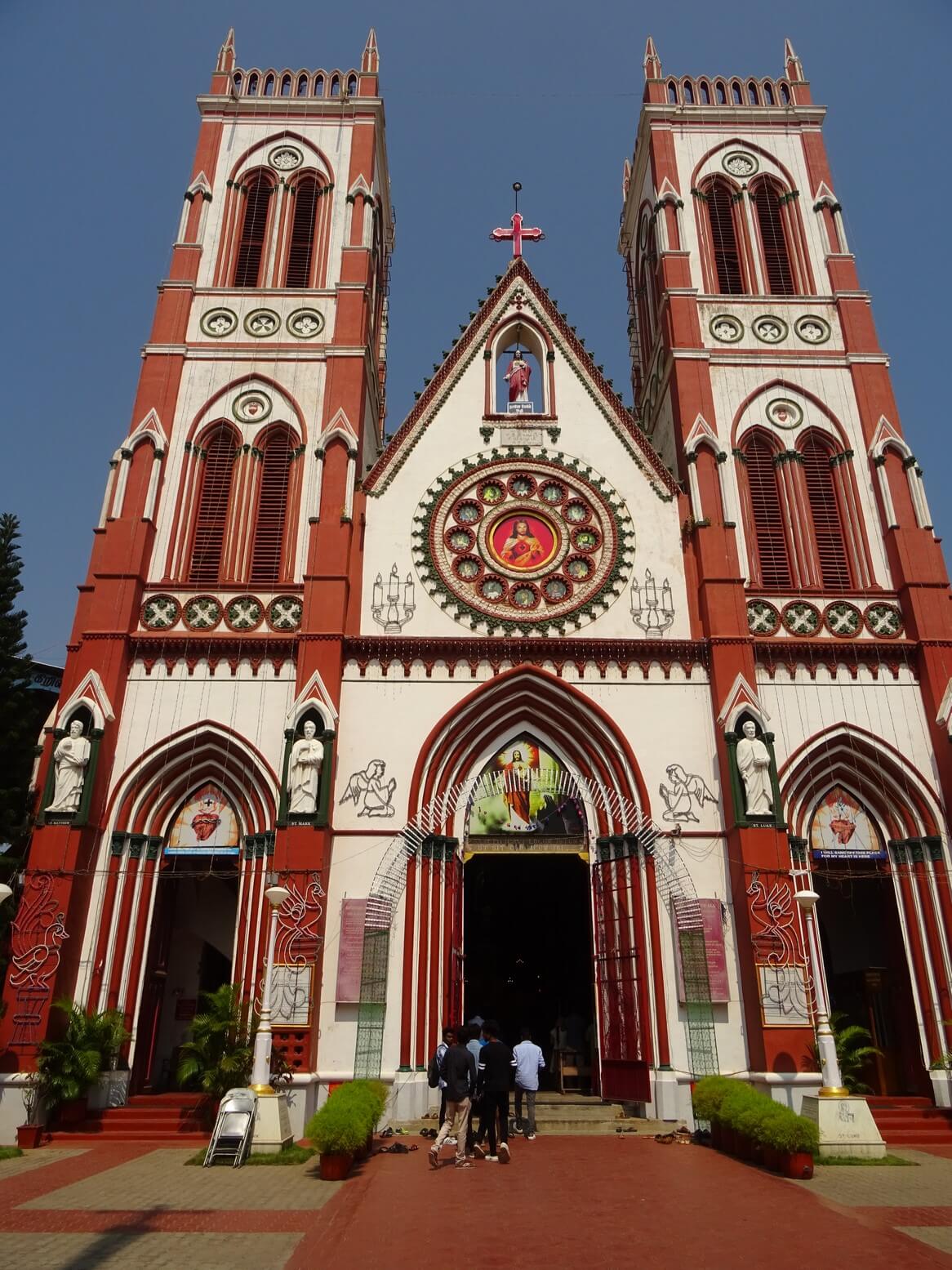 After walking between the three Cathedrals in the heat, we wanted to find somewhere a little shady, so we decided to have a look at the Botanical Gardens – famously where some scenes from the film Life of Pi were shot.  Sadly that’s probably the most exciting thing about the gardens. There is a cute toy train and a small but fairly interesting exhibit about the various plants and trees, but other than that it was a little disappointing, with lots of rubbish strewn about, not much vegetation and a particularly horrible smell!

One of the most famous things in Puducherry is the Sri Aurobindo Ashram. This spiritual community was founded in 1926 by Sri Aurobindo and The Mother. Visitors are allowed to file through a pretty and shade-filled courtyard, at the centre of which lies the flower-covered “Samadhi” – the shrine holding the remains of Sri Aurobindo and the Mother. Longer-term visitors can stay at the ashram and get involved in the day-to-day life and meditations of the community. It was pretty cool to get a glimpse of it – and it’s been the frist place that we’ve visited in this country where every single visitor obeyed the “silence” signs absolutely! When we visited the Taj Mahal, there were people chatting, whooping, and taking photos right next to the signs asking for silence and forbidding photography! The ashram seems like a lovely peaceful place.

The ashram influenced a whole settlement, around fifteen kilometers away. Auroville calls itself an international township and was founded by the Mother in 1968 with the aim of achieving human unity. The main reason that most tourists come to visit Auroville is to view the Matrimandir – a beautiful golden sphere surrounded by twelve symbolic petals, within a peace garden. There is also an incredible Banyan tree which is thought to be around one hundred years old. Unfortunately the visitor centre was closed when we visited so other than the Matrimandir all we were able to see was the cluster of cafes and shops on the main road to Auroville, giving it the impression of just another backpacker hotspot.

Puduchery was also a treat for our stomachs! We had one of the best thalis we’ve ever had at a restaurant called Surguru.

We also found a chocolate cafe which had a display of the most incredible looking cakes as well as hot chocolate that was out of this world. We went one evening and treated ourselves, and it was so good that we came back again the next evening for more! You might be wondering why we were drinking hot chocolate in this hot climate…but when it’s this good how could we resist!

If you think that looks good, check out the full hot chocolate video on our Instagram account at https://www.instagram.com/nofixedhome – and try not to drool!

0 thoughts on “Pretty Pongal in Pondicherry”