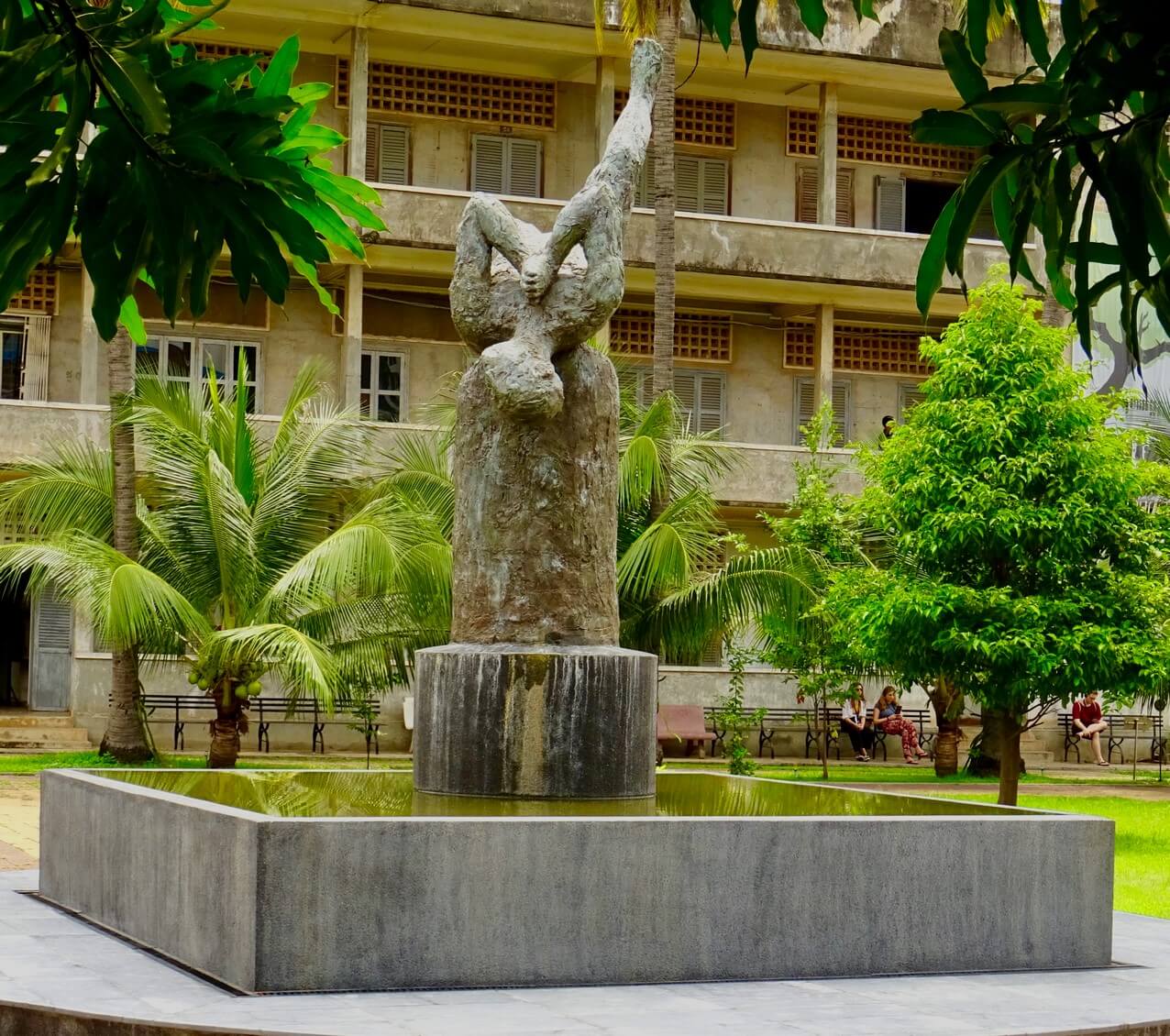 We posted before about our trip to Phnom Penh and all the delicious food that we ate, but we felt that our exploration of Cambodia’s dark past belonged in a separate post.

Learning about the history of the countries you visit is important. But a lot of the time the events you uncover are in the distant past. Not so with the chapter of Cambodia’s dark past that deals with the brutal regime of Pol Pot’s Khmer Rouge. One of the things that really got to us was the fact that a lot of the local people we’ve met along the way here will have lived through these events.

What was the Khmer Rouge?

Without delving too deeply into a history lesson, the Khmer Rouge was the name given to the leaders and followers of the Communist Party of Kampuchea. They seized power and claimed the capital city of Phnom Penh on April 17th, 1975. This began a reign of terror until the Vietnamese Army captured the city on January 7th 1979. During these four years the Khmer Rouge, led by Pol Pot, forcibly depopulated Cambodia’s cities and made people work communally on the land. The Khmer Rouge was a highly repressive, paranoid regime which presided over a horrific genocide. Accurate figures are not known but between 1.5 – 3 million people were killed. 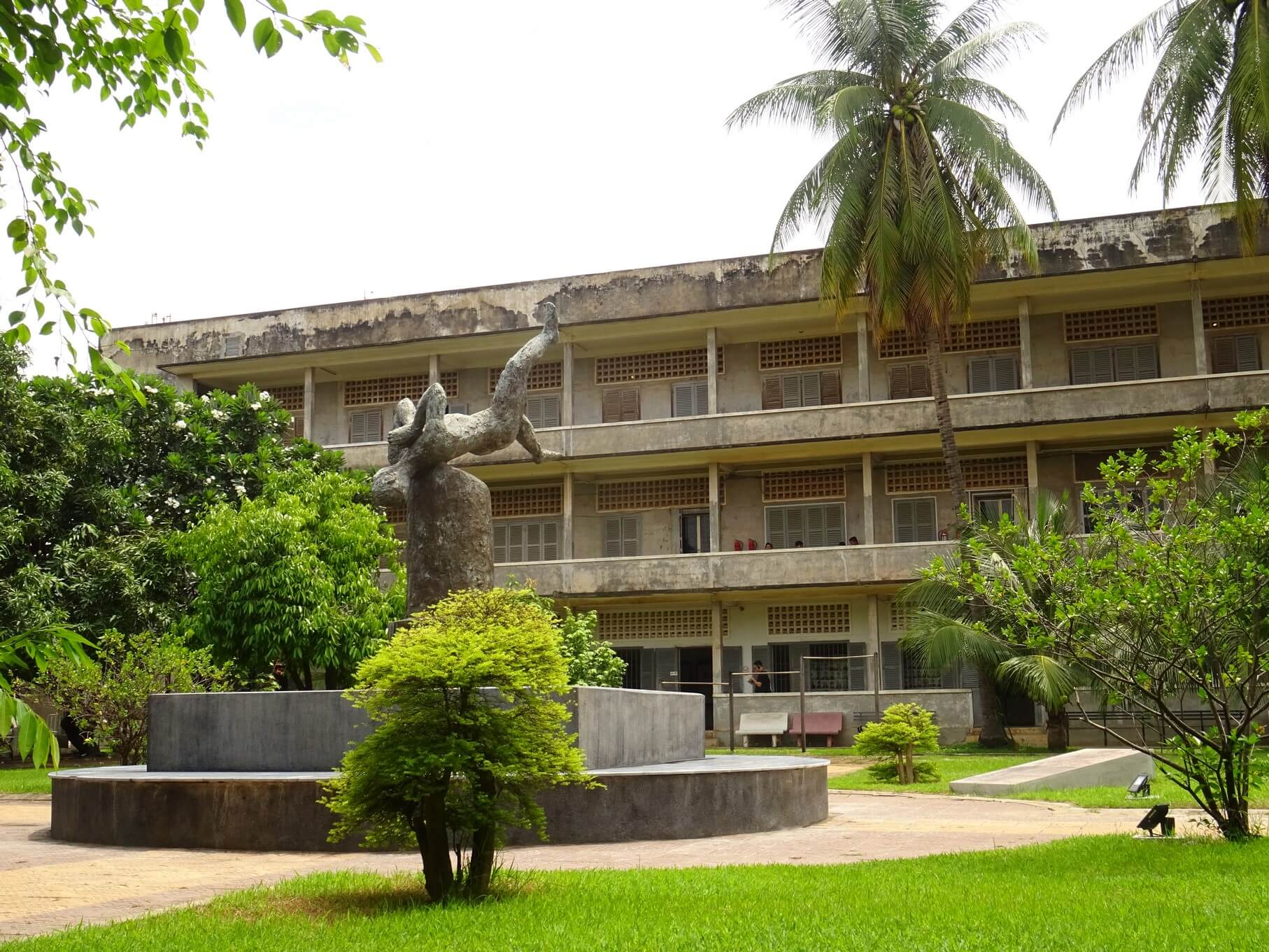 This truly was a place of horror under the Khmer Rouge. This former high school was just one of around 150 detention centres established by the regime. Classrooms were converted into cells and iron bars were added to the windows. During Pol Pot’s reign an estimated 17,000 people were imprisoned and tortured here. Only seven people are known to have survived. Prisoners were beaten and interrogated until they confessed to their ‘crimes’, which were often fabricated by the regime. In the beginning, most of the inmates were members and supporters of the previous government. However they soon included academics, monks, students, teachers, factory workers and, as the party leaders’ paranoia increased, members of the Khmer Rouge itself.

The prison has mostly been preserved how the Vietnamese Army found it in 1979. It now forms a public museum to illustrate the crimes of the regime and educate visitors. You can walk into the former classrooms and cells. There are photographs on the walls taken by the first people to discover the prison. A visit is not for the fainthearted as it shows many graphic images and the audio guide recounts many horrific incidents. Visitors can see the cells and torture rooms, still with the iron bedsteads that inmates would have been shackled to. The tour has been put together to educate, not to shock however. A lot of attention has gone into presenting the information, and it has been done with great care and respect.

Initially, once prisoners of the regime had ‘confessed’ they were executed and buried near to the prison itself. However, they soon began to run out of room. Victims were instead loaded into trucks and driven out to the former orchard of Choeung Ek. They were moved at night, packed into the trucks in darkness, not knowing where they were being taken. They may have even felt hope as they were finally being taken out of the prison and their interrogation was over. When they arrived, they were unloaded and killed. Due to the price of ammunition, most victims were battered to death with pickaxes, iron bars, machetes and other makeshift weapons. The bodies were then piled into unmarked mass graves. 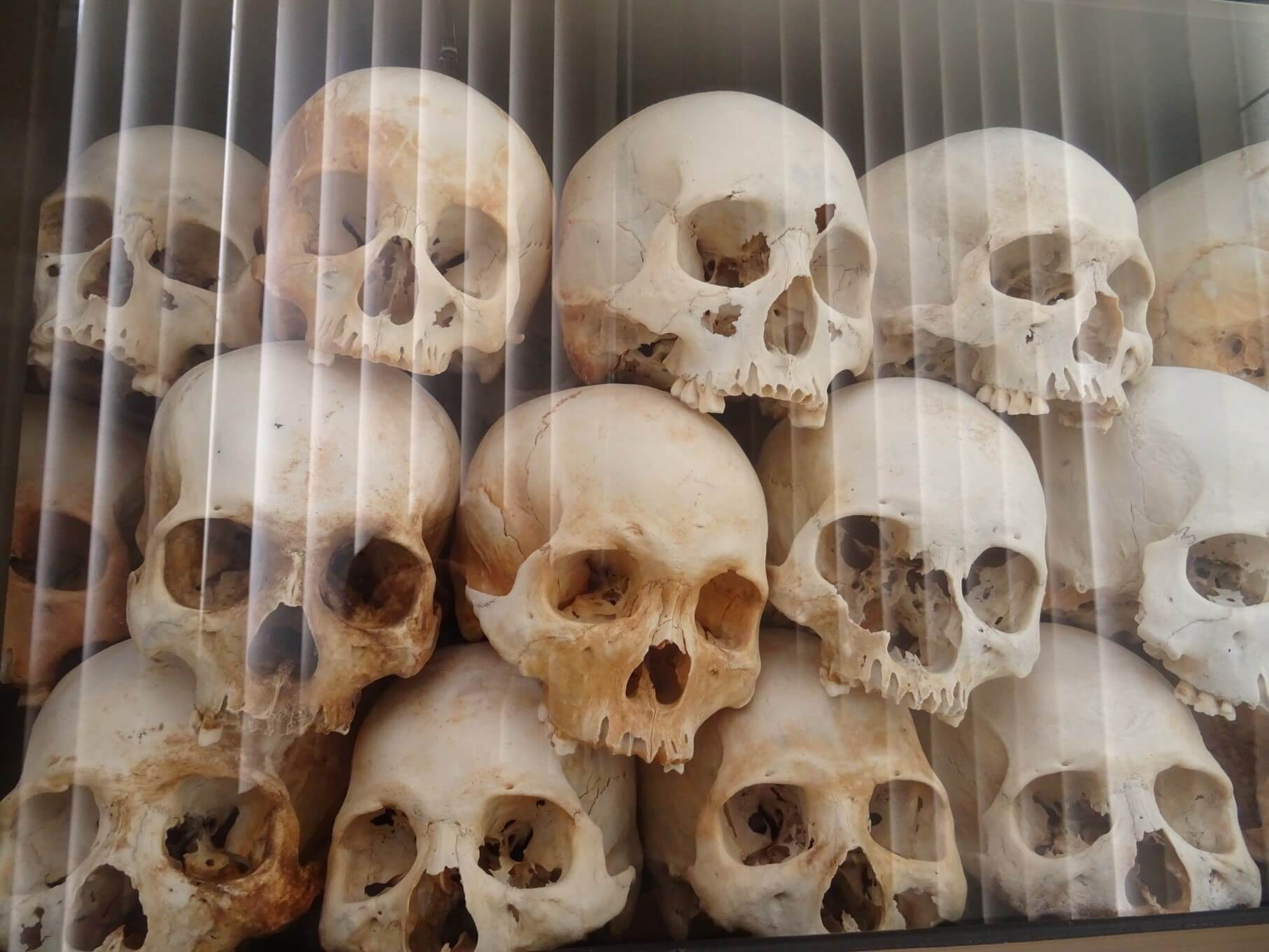 The Killing Fields site is now a memorial to the victims of the genocide. There is a large Buddhist stupa where people can pay their respects. The inside of the stupa is filled with skulls of the victims, encased in plastic and visible from the outside. There is also a very informative audio tour. Visitors can walk around the site and see where the mass graves are marked.

One of the most shocking things that we found out during our visit was that the Vietnamese liberation of Phnom Penh in 1979 was not the end of the Khmer Rouge. Unbelievably, they were still deemed to be the rulers of Cambodia and kept their seat in the UN for the next decade. They were supported by Western governments including Britain and the US. Even after the extent of the genocide was known, Cambodia and its people were used as pawns in the bigger political picture with many countries supporting the Khmer Rouge. Even into the 1990s, the Khmer Rouge still existed and were fighting for a portion of control over Cambodia. It was not until 1998 that the leaders apologised for the genocide. By 1999 the remaining leaders had been captured or had surrendered. 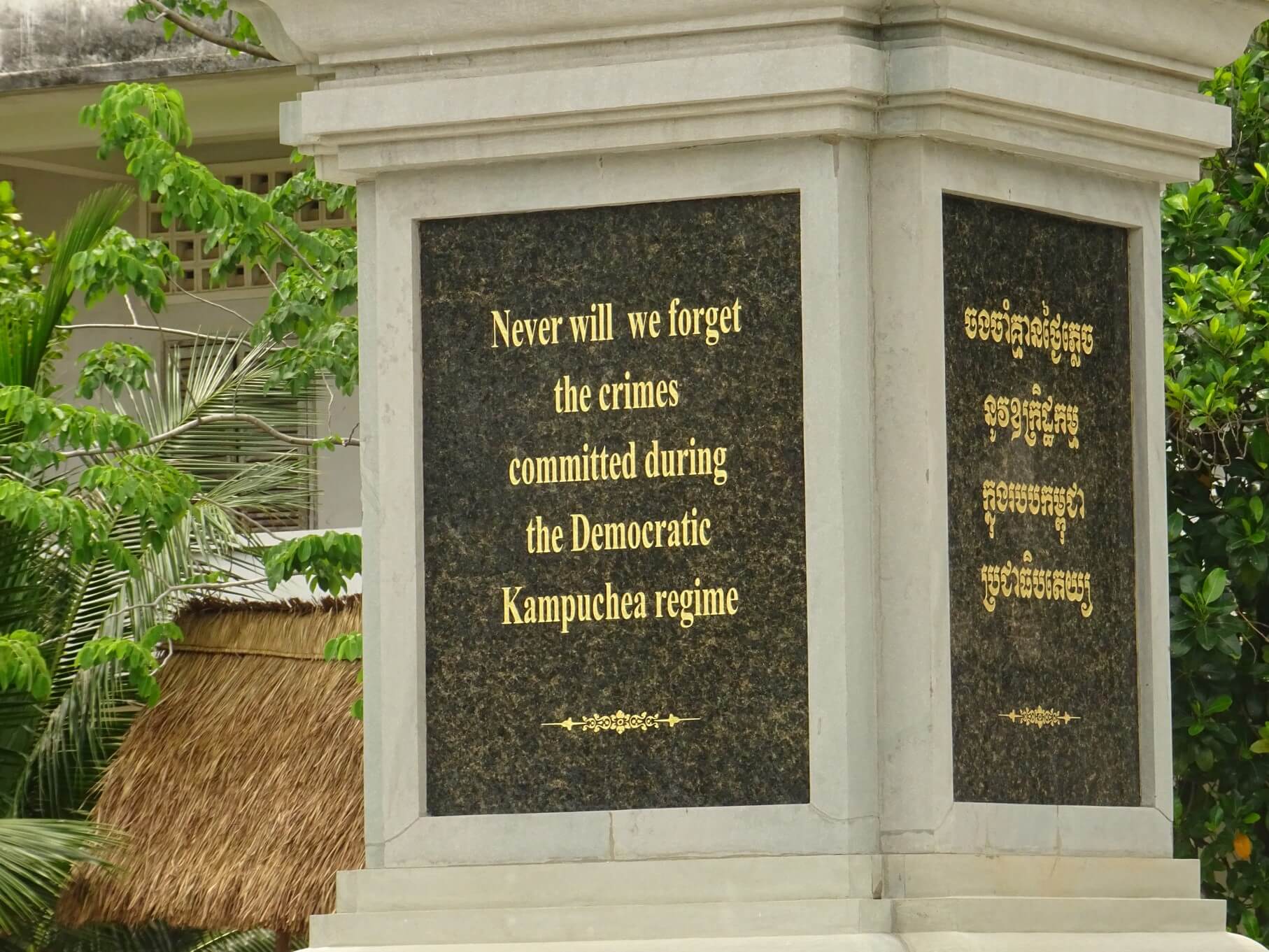 Delving into Cambodia’s dark past is not easy. However we feel that visiting sites like these is an important part of a visit to this beautiful country. As long as these tourist attractions are designed with respect, and are designed to educate rather than shock, then learning about the past can only be a good thing for the future. Cambodian people have been through a terrible ordeal and we have a duty to understand that as visitors to their country.

What can we learn from these visits?

We owe it to the victims of the Khmer Rouge to remember their suffering. And we owe it to future generations to pass on the knowledge of terrible crimes such as these, in the hope of preventing them from happening again.  A quote from the German ambassador at the end of the audio guide really stuck with us: “(S21) reminds us to be wary of people and regimes which ignore human dignity. No political goal or ideology, however promising, important or desirable it may appear, can ever justify a political system in which the dignity of the individual is not respected.”

To learn more about this chapter of Cambodia’s dark past you can visit the following websites:

6 thoughts on “Exploring Cambodia’s Dark Past: A Visit to S21 and the Killing Fields”